Have you ever been happy to be by yourself? Has there been another time when you were by yourself, but wishing for the company of others?

In both of these situations, you were alone. But you were only lonely in one of them.

Alone and lonely are two adjectives with related, but different, meanings. They are similar enough to confuse many writers, but using them carefully will enhance your writing and make describing some emotional states easier.

If you have ever wondered whether you should choose lonely or alone to describe a feeling of isolation, continue reading for an exploration on the true meaning of each of these words.

What is the Difference Between Lonely and Alone?

In this article, I will compare lonely vs. alone. I will use each word in a sentence to illustrate its proper context. Plus, I will give you a useful memory trick to help you choose either alone or lonely for your own writing.

When to Use Lonely

What does lonely mean? Lonely is an adjective. It describes a feeling of sadness stemming from isolation or abandonment.

A person can be alone without feeling lonely, since alone describes a state of being and lonely describes an emotional response to one’s circumstances. Most people don’t feel sad when they go to the bathroom by themselves, for instance.

When to Use Alone

What does alone mean? Alone is also an adjective. It describes a single person or object, separate from others. One who is alone is by oneself.

Lone vs. Alone: What’s the Difference?

What does lone mean? Lone is another adjective with the same meaning as alone. It is a shortening of the word alone, but it has a different place in the English sentence.

Lone comes before the noun while alone comes after the noun.

These mistake is rarely made, but it is still worth mentioning. 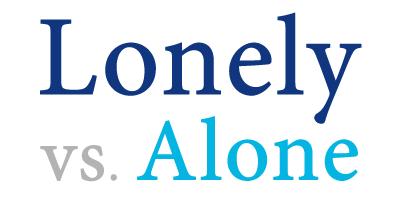 Here is a helpful trick to remember alone vs. lonely.

Alone and lonely are both adjectives, but they have different meanings.

A person is alone when he is by himself. A person is lonely when he feels abandoned or sad due to isolation.

Since alone and solitary both contain the letter A, you can remember that alone refers to a state of solitude, rather than an emotion.

Is it lonely or alone? Lonely and alone are both adjectives.

Loneliness is often, but not always, a result of being alone.