Home » Hands on or Hands-on – What’s the Difference?

Hands on and hands-on are probably in the middle of this process. The eventual progression to a closed compound, however, will probably be blocked by the clumsiness of handson, which looks like it could just as easily be a compound of hand and son, or some alternative spelling of the name Hansen.

As it stands today, which one should you use? If you have done a fair amount of reading, you will probably have seen both forms of this word in written English. They are both legitimate English constructions, but not in the same contexts.

What is the Difference Between Hands on and Hands-on?

In this post, I will compare hands on vs. hands-on. I will use each version of this term in an example sentence, so you can see how to use it in context.

Plus, I will also make use of a memory tool, called a mnemonic device, that will allow you to more easily choose hands-on or hands on.

When to Use Hands-on

What does hands-on mean? Hands-on is an adjective that describes the physical nature of some work, like hands-on experience in an oil field. It could also describe a person who has a very active disposition toward something, like a hands-on management style.

When to Use Hands On

What does hands on mean? Hands on is not a standard alternative to the adjective hands-on.

That’s not to say the words hands and on would never appear next to each other in a piece of writing. One could have one’s hands physically touching something; the documentary Hands on a Hard Body follows an endurance competition to see who can remain physically touching a pickup truck for the longest amount of time.

Hand on is a verb phrase, as well. The third person singular present conjugation of the phrase would be he/she hands on.

Trick to Remember the Difference: Hands-on vs. Hands on 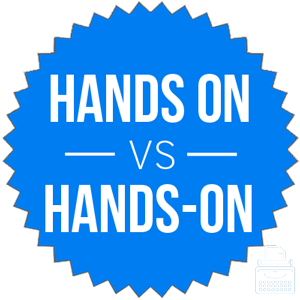 Only hands-on is a valid adjective. Hands on might be a verb phrase, or it might refer to physical hands actually touching something, but it is never properly used as an adjective.

Since hands-on is in the company of several other hyphenated adjectives, including well-equipped, you should be able to group these words together in your mind.

Is it hands on or hands-on? Hands-on is an adjective that describes a type of labor or an active predisposition toward something. Hands on is sometimes a verb phrase, sometimes a noun phrase, but never an adjective phrase.