Every four years, sports fans all over the world watch the Winter Olympics with a mixture of awe and trepidation. Some sports (curling, cross-country skiing) are relatively safe, without sacrificing excitement. Others, like luge and skeleton racing, seem like a fatal accident is only ever a millisecond away.

Luge and skeleton racing appear very similar to the casual observer: racers compete at high speed on sled-like vehicles. On closer inspection, though, there are a few important differences between these Olympic events. Continue reading to learn more about them.

What is the Difference Between Luge and Skeleton?

In this post, I will compare luge vs. skeleton racing. I will briefly outline each sport as well as the differences between each.

Plus, I will show you a helpful memory tool that will help you remember whether you are watching (or competing in) luge or skeleton racing.

When to Use Luge 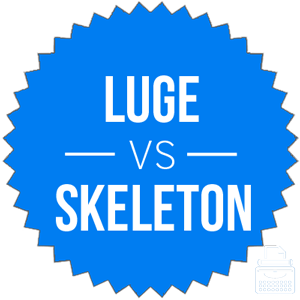 What does luge mean? The word luge can be a noun or a verb.

As a noun, luge means a small, lightweight sled for one or two people. It can also refer to events that involve racing these devices.

As a verb, luge refers to the act of riding the sled.

A person who rides a luge is called a luger. Lugers ride on their backs with their feet facing forward, and steer by strategically pressing on the luge with their legs. In 2014, Team USA won its first medal in luge when Erin Hamlen won the bronze in the singles competition.

When to Use Skeleton Racing

Skeleton became an Olympic event in 1928. It appeared only one other time before 2002, when it became a permanent fixture in the Olympic program.

These words refer to two related but distinct sports.

Since skeleton and stomach each begin with the letter S, it is easy to recall the position skeleton racers adopt during competitions.

Is it skeleton or luge? Luge and skeleton racing are both Olympic events. They involve fast downhill racing on a sled.

If you are a sportswriter or even simply an Olympic spectator, it pays to know the differences between these events.