English has many words that are spelled differently and have different meanings, but which, when spoken, sound similar or even exactly the same. These words are called homophones, and they can make life confusing for someone who isn’t familiar with them.

To make matters even worse, inexperienced writers are prone to misusing these words, which only adds to the confusion. Fortunately, there is any easy trick to figuring out whether gist or jist should be used in any situation.

What is the Difference Between Gist and Jist?

In this article, I’ll explain the difference between these two words, use each in a sentence, and describe one way to remember whether jist or gist is the appropriate word to use in a given context.

When to Use Gist

What does gist mean? Gist is a noun that means a quick summary or the main point of something. If Sophie were telling Maisie a long, boring story about a boy she had met while kayaking, their conversation might look something like this:

Sophie: “And then, after we had paddled 20 miles, Kit told about how he had been in the Peace Corps, and-”

Maisie is asking Sophie to only tell her the important point of her story, instead of all the unnecessary details. This is a proper usage of the word gist.

This usage is also correct.

Outside Examples of Gist

When to Use Jist

What does jist mean? Sometimes, however, writers substitute jist for the word gist. To do so is an error. The word jist is a pronunciation spelling of the word just when spoken with an American Southern accent.

As a pronunciation spelling of just, jist can function as an adjective or an adverb, much the same way that just does. This is an acceptable use of jist because it conveys the way some speakers might pronounce the word just, but outside of that use, it should be avoided.

Jist should never appear when the context of a sentence calls for gist.

Gist vs. Jist: Trick to Remember the Difference 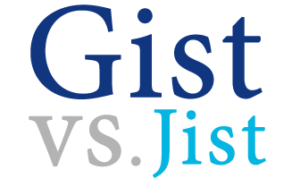 Let’s talk about an easy way to keep these two words straight. Gist and good both begin with the letter G. Gist is a good word for a summary or important point.

Jist is not a good word for those things, as it is not a word at all. One could say that jist is “just wrong.” Jist should not be used in professional or academic writing, as it would be considered a spelling error in these contexts. Jist is only appropriate for creative writing.

Is it jist or gist? To sum up, then, gist is the summary or main point of something.

Jist is not a proper word in and of itself, but it can be a creative way to spell just if you are attempting to convey a specific pronunciation of that word. If you can’t decide whether to use jist vs. gist, remember that gist is a good word for a summary or main point, and jist is just wrong.