Home » Got vs. Gotten – What’s the Difference?

Languages are prone to evolve. Evolution of language occurs for any number of reasons, including geographical isolation of a group of speakers, natural change over time, and the need for new words to describe concepts that didn’t exist in the past.

In some cases, two different communities decide they want to speak different versions of a shared language simply to differentiate themselves from each other. By some accounts, part of the drive behind forming American and British forms of English was this exact reason. Americans wanted a distinctly American form of English, while the British have been more than happy to reinforce these differences to highlight their own linguistic superiority.

What is the Difference Between Got and Gotten?

In this post, I will compare got vs. gotten. I will use each of these words in at least one example sentence, so you can see how they appear in context.

Plus, I will show you a memory tool that can help you choose either got or gotten correctly in your own writing.

When to Use Got 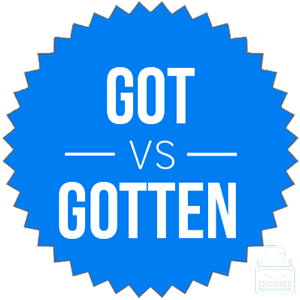 Is it got or gotten? Got is a conjugation of the verb get, which means to obtain something.

One might get coffee from a café, for instance. To get something could also mean to obtain understanding, as in the phrase I just don’t get math.

Got can also be the past participle of get.

When to Use Gotten

What does gotten mean? Gotten is another way to conjugate get as a past participle.

While these charts aren’t exhaustive in their literary scope, they only look at books published in English since 1800, they still paint a clear picture of a long-term usage trend.

American English: Got vs. Gotten

As the above charts show, American writers are more likely to use the word gotten than their British counterparts. But this graph doesn’t show the full story of this word’s use, as there is a usage difference in American English between got and gotten.

As the Oxford English Dictionary notes,

Let’s look at a few examples to illustrate this.

The first example is about acquiring tickets to the Super Bowl. The second example is a description of someone’s ability to pay for something.

Got is your only option for a simple past tense form of get. As a past participle, however, there is a slight difference in American English usage.

Since gotten is spelled with an N, like the word acquisition, you can remember that that word is used when talking about how something has been acquired..

Is it gotten or got? The verb get is conjugated as a past participle as either got or gotten.