Home » Sweeped or Swept – Which is Correct?

There are many verbs in English that do not follow the standard rules of conjugation. These verbs are irregular verbs. They follow their own rules, and there is often no easy way to remember those rules since they differ so widely.

Sweep is one such verb. While regular English verbs take the –ed suffix in the past tense, sweep follows different rules, along with other verbs like keep and leap. Continue reading to learn more about these confusing words.

What is the Difference Between Sweeped and Swept?

In this post, I will compare sweeped vs. swept. I will outline the correct conjugation and use it in several example sentences. That way, you can see how it appears in context.

Plus, I will show you a helpful memory tool that will allow you to choose either sweeped or swept correctly in your own writing every time.

When to Use Swept 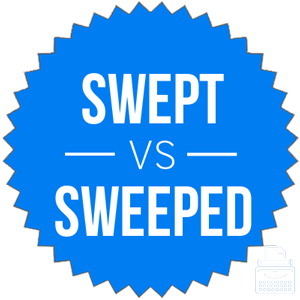 What does swept mean? Swept is verb. Specifically, it is the past tense version of the verb sweep. Sweep can mean to clean a floor or to move swiftly.

Here is an example of each,

The verb sweep can also mean to win all the games in a series. The Golden State Warriors famously swept the Cleveland Cavaliers in the 2018 NBA finals, beating that team for the third time in four years.

Here is another example,

When to Use Sweeped

Sweeped is an error, based on an overgeneralization of regular English conjugation rules to the irregular verb sweep.

While most English verbs become past tense by adding –ed, sweep does not. It is an irregular verb, which means it does not follow the same conjugation rules.

A few English verbs can take either the –ed ending or the –t ending, such as leap. Swept is not one of them, though.

In your own writing, you should stick to swept. Sweeped is nonstandard and is considered a mistake.

Swept vs. Sweeped Check: Since swept rhymes with kept and leapt, it is easy to remember to use swept when you need the past tense version of sweep.

Is it swept of sweeped? Only one of these spelling is a correct conjugation of the word sweep.

Swept is the past tense conjugation of the verb sweep, which can mean to move swiftly, to clean a floor, or to win all the games in a series.

Sweeped is a nonstandard form that originates in overgeneralization of regular English conjugation rules to this irregular verb.