Home » Co-operate or Cooperate – What is the Difference?

According to some evolutionary historians and anthropologists, the ability to work together to achieve mutually beneficial goals is what sets humanity apart from other animals.

We can observe some species of animals working together to increase survival chances, so this claim may be truer in spirit than in actual fact. Humans do have a capacity for understanding and perspective-taking that is not found elsewhere in the animal kingdom.

Writers, though, will eventually tire of the phrase working together to achieve mutually beneficial goals. Isn’t there a simpler word that can convey the same idea?

Of course there is. That word is cooperate, and it sums up in a single word what seven words say above.

English has been used for several hundred years, and cooperate has had several forms in that time. During the course of its usage, it has appeared as both co operate and co-operate, in addition to its more familiar form, cooperate. But which should you use?

What is the Difference Between Cooperate and Co-operate?

In this article, I will compare co-operate vs. cooperate. I will use outline the dominant spelling, and I will also show you a memory trick that makes choosing co-operate or cooperate much easier.

When to Use Cooperate

What does cooperate mean? Cooperate is a verb. It means to work together with others.

Members of a team cooperate to achieve a common objective, and the burrowing tarantula and dotted humming frog cooperate to give the frog extra food and to keep pests away from the tarantula’s eggs.

When to Use Co-operate

What does co-operate mean? Co-operate is not a standard variant of this word. It has been declining across World English since the 1940s.

Up until the early 20th century, a writer would be more likely to hyphenate the word, but around 1910, the nonhyphenated cooperate took over, and has been the preferred term ever since.

The chart below shows the relative usage of all three of these variants in published English books since 1800:

This chart graphs cooperate vs. co-operate vs. co operate across English books since 1800. Since it excludes other forms of media, it’s not 100 percent exhaustive, but it does show a general trend.

Also, it should be noted that cooperate is preferred in both American and British English.

Additionally, co-operate can still be used in the sense of dual operation. For example, 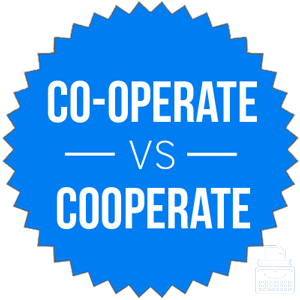 In the present day, you should only use cooperate. Co-operate fell out of favor around 1910, and co operate is not a standard variant of this term in any context.

Since cooperate rhymes with commemorate, and each a single word with three syllables that starts with C, you should have little trouble remembering to use cooperate instead of the other forms.

Is it cooperate or co-operate? Cooperate is a verb that means to work together.