Do you know the difference between blackmail and extortion?

Unless you are a mafia enforcer, the difference probably isn’t germane to your everyday life, but you might still need to know the difference so that when someone else commits one of these crimes, you will be able to sound intelligent and well-informed while discussing it with your friends and coworkers.

What is the Difference Between Extortion and Blackmail?

In this post, I will compare blackmail vs. extortion and use each in several example sentences to give you an idea how each word should appear in context.

Plus, I will show you a helpful memory tool that makes choosing blackmail or extortion a little easier, at least for writing purposes.

When to Use Extortion

What does extortion mean? Extortion is a noun. It refers to the practice of obtaining something through illegal means, like brutality or coercion. Extortion can also mean illegally using one’s elected office for personal gain.

Below, you will find examples of extortion in a sentence.

Extortion should be distinguished from bribery. Bribery means illegally offering something in exchange for preferential treatment. If you engage in bribery, you offer someone something good, like a sum of money. If you engage in extortion, you threaten someone with something bad, like killing a family member.

When to Use Blackmail

What does blackmail mean? Blackmail can be a noun or a verb.

As a noun, blackmail traditionally means the act of threatening to release damaging information about someone unless they give you money.

In practice, though, many people use blackmail in such a way that it doesn’t necessarily involve a monetary payment. A common sitcom plot involves one character threatening to reveal another character’s dirty secrets to get them to do something nice for them, or even for a third character.

Blackmail can also be used as a verb, where it refers to engaging in the activity described above. 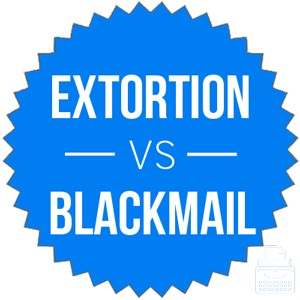 Today, the way many people use blackmail is akin to a type of extortion. Classically, though, blackmail refers to a threat of releasing damaging information in exchange for a monetary payment. Extortion is getting someone to do what you want by any of several illegal means, like violence or abusing an elected office.

Extortion vs. Blackmail Check: Since blackmail and information both contain the letter I, it should be easy to remember that blackmail involves damaging information.

Is it extortion or blackmail? Both of these practices are illegal, but they refer to different acts.