Home » Jerry Rigged or Jury Rigged – Which is Correct?

It can be tricky to make sense of all the spelling variations in English. Even common phrases can be spelled multiple ways, which makes things difficult for language learners and beginning writers.

Jury-rigged and jerry-rigged are phrases that are only different by two letters. Continue reading to learn whether they mean the same thing, and if so, which one you should use in your own writing.

What is the Difference Between Jerry-Rigged and Jury-Rigged?

In this post, I will compare jerry-rigged vs. jury-rigged. I will outline the correct spelling of this phrase and use it in a few example sentences. This will make its context clear.

Plus, I will show you a helpful memory tool that makes choosing either jerry-rigged or jury-rigged much easier.

When to Use Jury-Rigged 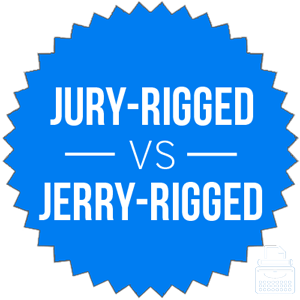 What does jury-rigged mean? Jury-rigged is an adjective or verb phrase. In this context, rigged means tied or fastened. This phrase is derived from nautical terminology, where a jury mast was a replacement mast that could be quickly erected in an emergency if a ship’s regular mast broke. Sails would need to be rigged to this new mast.

Hence, a ship that was quickly repaired and tied together as best as possible was jury rigged. The use has spread to refer to anything that has been kludged together as a temporary fix until a better repair can be staged. It has nothing to do with a jury in the legal sense.

As an adjective, the words are hyphenated as jury-rigged. This usually goes for the words as a verb phrase, too, but not always.

When to Use Jerry Rigged

What does jerry rigged mean? Jerry rigged is a common misspelling of the term jury-rigged. It probably stems from the similar way that some speakers pronounce jury and jerry and everyday language users’ unfamiliarity with nautical slang.

The chart below shows the relative usage of jerry-rigged and jury-rigged:

As you can see, jury-rigged predominates by a large margin, but the misspelling jerry-rigged has become more popular in the last 50 years. In his book Garner’s Modern English Usage, Bryan Garner estimates the difference in usage to be 71:38 between the two words.

Even though most readers would recognize and understand jerry-rigged, you should stick to jury-rigged in your own writing. Jury-rigged is the standard spelling of this phrase, and the version that appears in most dictionaries.

Jury-rigged vs. Jerry-rigged Check: Remember that jury and nautical both contain the letter U. Since jury is a nautical term for a replacement mast on a boat, it will be easy to remember which version of this phrase is the better choice.

Is it jury-rigged or jerry-rigged? If you jury-rig something, you quickly fix it until you can find a more permanent solution.