Cafes the world over have expanded their menus to cater to ever more discerning coffee lovers. Where once you might have been lucky to find any options beyond regular and decaf coffee, today, most establishments are eager to offer a litany of specialty drinks that may include coffee only as a formality.

Two of the more ubiquitous drinks, lattes and cappuccinos, seem to differ only in name. Upon closer inspection, though, these two terms refer to distinctly different drinks.

What is the Difference Between Cappuccino and Latte?

In this post, I will compare cappuccino vs. latte and use each word in an example sentence. This way, you will be able to see each word as it appears in context.

Plus, I will show you a helpful memory tool that makes choosing cappuccino or latte much easier in context.

When to Use Cappuccino 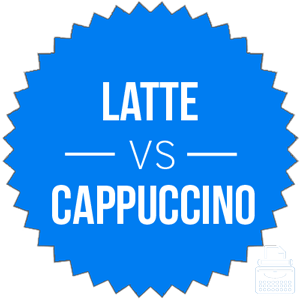 Here are some examples of cappuccino in a sentence,

Cappuccino is a loanword from Italian. According to Merriam-Webster, the word derives from the similarity in color between the drink itself and the traditional attire of a Capuchin monk. The drink became popular in America in the 1990s during the “Third Wave” of coffee.

When to Use Latte

Like cappuccino, latte is also an Italian loanword. The original term was caffe latte, and translates to milk coffee.

These words refer to different coffee drinks, so you should use them carefully. The main difference between them is in the amount and texture of the milk.

Latte vs. Cappuccino Check: Since a latte has much more milk than a cappuccino, and latte translates literally to milk, it should not be difficult to remember to use latte to describe the drink with more milk in it.

Is it latter or cappuccino? Cappuccino and latte are loanwords from Latin that refer to specialty coffee drinks.

Be sure to use each word carefully, lest you accidentally order the wrong drink next time you visit a café.