Many words are spelled differently in American and British English, even if they fulfill the same function in a sentence.

Learnt and learned are two different spellings of the same verb. One is accepted in British English, but not in American English.

Depending on where you are writing, you might choose learnt or learned. But, which is it?

Continue reading to find out.

What is the Difference Between Learnt and Learned?

In this post, I will compare learnt vs. learned. I will use each spelling in an example sentence to demonstrate its proper context. Plus, I will show you a mnemonic to help you decide whether you should use learned or learnt.

When to Use Learned

What does learned mean? Learned can be an adjective or a verb.

As an adjective, learned is a synonym of knowledgeable and sometimes describes to a person who is highly educated. The sentences below demonstrate the usage of learned as an adjective.

As an adjective, learned is pronounced with two syllables. The first syllable is stressed, much the same way as the word perfect (ler-ned)

Of course, learned is also the past tense form of the verb learn, which means to acquire knowledge. See the following sentences for examples.

When to Use Learnt

What does learnt mean? Learnt is an alternative spelling of the same word. It rhymes with burnt. It is only used as a past tense verb, and only in British English, like in these sentences:

As you can see in the chart below, which graphs the appearance of the phrases “he learned” and “he learnt” in British English books since 1800, learnt is less common even in that corpus.

This chart is not scientific or infallible, since it only tracks word use in books written in English, ignoring all other sources. Still, it helps visualize a clear long-term trend. 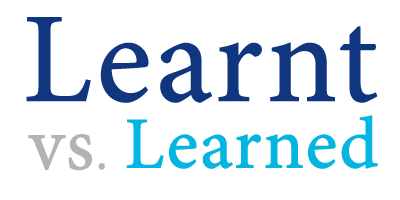 Here is a helpful trick to remember learned vs. learnt, and it is a pretty simple one.

You should probably never use learnt. It is only common in British English as a past tense verb, and even in that context, it is overshadowed by learned.

In situations where you want to capture the way some speakers of English might actually talk, it could be helpful to choose learnt over learned. At all other times, choose learned instead.

There is another word available; that word is learned.

Is it learnt or learned? Learnt and learned are variant spellings of the past tense form of the verb learn, which means to acquire knowledge.

You should always choose learned, especially in formal writing. It is more common even as a British English verb, the one context where learnt is accepted.

You can remember to avoid learnt since it rhymes with burnt, and most people also seek to avoid things that are burnt.