Some homophones, similar-sounding words that don’t mean the same thing, are harmless. But elicit and illicit are not among them.

They are completely different parts of speech; choosing the wrong one would be an embarrassing mistake. Moreover, it could mean the difference between asking for a response and instigating dangerous criminal activity.

With that important warning in mind, how should you use illicit or elicit in your writing? There is an easy way to decide. Continue reading for a discussion of these two confusing homophones.

What is the Difference Between Elicit and Illicit?

This article compare elicit vs. illicit. I will use each word in an example sentence to demonstrate its proper use.

Plus, I will give you a useful trick to help you remember whether to use elicit or illicit, depending on your meaning.

When to Use Elicit

What does elicit mean? Elicit is a verb. It is a synonym of evoke, where that word has the meaning to draw out.

When to Use Illicit

What does illicit mean? Illicit is an adjective. It means illegal or otherwise forbidden. You can see examples of this word’s use in the sentences below. 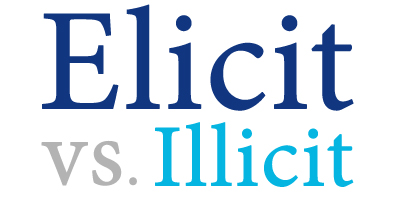 Here is a helpful trick to remember illicit vs. elicit.

If the word you are using is an adjective, you probably mean illicit. Elicit is never an adjective.

Is it elicit or illicit? While these two words sound the same when spoken, the mean very different things.

Since elicit and evoke both start with the same letter, much the same as illicit and illegal, pairing these words with their synonyms will help you remember which is which, and in what contexts they should be used.

Now that you know the difference between these words, you can be confident that your writing will not suffer from this simple mistake. Any time you have questions about other confusing words, you can check this site for an explanation.