Should you use aka or a.k.a.? If you have ever stressed over those three little periods, you aren’t alone.

Both aka and a.k.a. see frequent use in print, but the rules of style guides and formatting standards are often strict and unforgiving. Many college students see MLA formatting as rigid and inflexible, until they are required to adhere to APA formatting or Chicago style and learn to see MLA as relatively indifferent to most formatting minutiae.

In this case, though, most sources are in agreement. Continue reading to learn whether you should use a.k.a. or aka.

What is the Difference Between A.k.a and Aka?

In this post, I will compare a.k.a. vs. aka. I will use each version in an example sentence or two, to give you an idea of how they should appear in context.

Plus, I will show you a memory tool that makes it easier to choose the preferred spelling of this abbreviation.

What does a.k.a. mean? A.k.a. is an abbreviation of the phrase also known as, which introduces pseudonyms or other ways to refer to something. It is popular in many writing contexts, and most English users will be familiar with it.

A.k.a. should be pronounced “ay-kay-ay,” never “ah-kah.” In other words, you should spell out the individual letters when speaking them aloud.

When to Use Aka

What does aka mean? Aka is another spelling of the same abbreviation. The only difference is that it leaves out the periods. Aka is still pronounced “ay-kay-ay,” and it means exactly the same thing and fits into all the same contexts as a.k.a.

In fact, most sources prefer aka to a.k.a., including AP style, Merriam-Webster, and the Oxford English Dictionary. Too many periods can be clunky or confusing, especially in scientific contexts, which are often already clogged with decimal points as part of statistical notation. Aka is simpler and cleaner, and since it doesn’t resemble the spelling of any other common English word, there is little reason to keep the periods in this abbreviation.

As you can see, though, both forms do appear in print sources:

This chart graphs aka vs. a.k.a. in English books since 1800. Since it only looks at books, it isn’t exhaustive in its scope. It does, however, clearly illustrates a long-term usage trend. 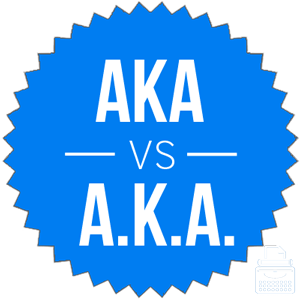 For all the reasons discussed above, you should choose aka over a.k.a. unless you have been specifically instructed not to do so.

Is it a.k.a. or aka? Aka and a.k.a. are abbreviations of the phrase also known as, which introduces pseudonyms and other ways to refer to something.

Both forms are popular, but most dictionaries and style guides prefer aka, so you should, too.