If you hold something to be true, do you believe it, or belief it?

If you aren’t sure what the answer should be, you aren’t alone. Many writers are confused by these two words. The plural version, beliefs, is also close enough to believes to cause confusion.

What is the Difference Between Believes and Beliefs?

In this article, I will compare beliefs vs. believes. I will make sure to use each of these words in a sentence as an example of their proper use in context.

Plus, I will reveal a useful trick that can help you remember whether beliefs or believes is appropriate in any given situation.

When to Use Believes

What does believes mean? Believes is a verb. It is the third person singular present tense form of the verb believe, which means to accept something as true.

When to Use Beliefs

What does beliefs mean? While believes is a singular verb, beliefs is a plural noun; it means acceptance that something is true. It can also be used as a synonym for trust or faith in some contexts. 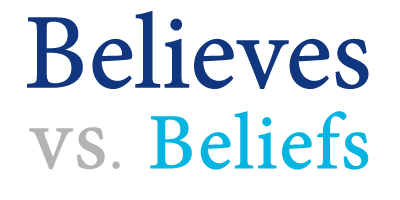 The criteria for choosing between these two words are simple. One is a noun, and the other is a verb, so your choice will depend upon how you are using the word in a sentence.

Rules for Believes vs. Beliefs:

Believes and verb are each spelled with the letter V, so as long as you can remember how to spell the word, you will know its proper context in your writing.

Is it believes or beliefs? Believes and beliefs are similar words, but they are different parts of speech.

They are not interchangeable, but it is easy to remember when to use which. Since believes is a verb, and believes and verb each contain a V, using it correctly is as simple as knowing how it is spelled.

Now that you know how to use these two confusing words, be sure to check this site with any other writing questions you may have. And if you are ever stuck choosing believes or beliefs, you can check back here for help.