Homophones are words that sound alike when spoken aloud but are spelled differently and have differing meanings.

Hale and hail are homophones that confuse even longtime English users. Each can be used as multiple parts of speech. As verbs, one of them means to be from somewhere, and the other means to be called to go somewhere.

It is easy to see why these words give beginning writers and language learners difficulty. Strong writers are careful to always use a word in its proper context, so continue reading for an explanation of the differences between these two homophones.

What is the Difference Between Hail and Hale?

In this post, I will compare hail vs. hale. I will use each word in at least one example sentence, so you can see how it appears in the proper context.

Plus, I will share a memory tool that makes choosing either hail or hale quite simple.

When to Use Hail 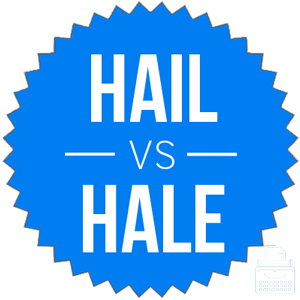 What does hail mean? Hail can be a noun or a verb.

As a noun, hail refers to frozen precipitation.

Hail can also figuratively describe anything that seems to come at a person hard and fast.

Hail can also mean to call a ride.

Hail also means to be from somewhere, as in the common phrase to hail from.

It’s common to ask someone, “Where do you hail from?”

When to Use Hale

What does hale mean? Hale can be an adjective, where it means healthy and robust, as in the phrase hale and hardy. In this article, however, I will focus on its use as a verb that means to compel to go somewhere.

This usage is mostly confined to legal contexts where a person is ordered to appear in court. Here, the phrase is hale to court.

Hail has many meanings, but hale is only used as a verb in legal contexts.

Hale versus Hail Check: Since hale and legal are each spelled with the letter E, it’s easy to remember when to use this verb.

Is it hale or hail? These two words, despite being homonyms, are never interchangeable.

Hail can be a noun or a verb, where it refers to frozen precipitation. It can also be a verb that means to be from somewhere.

Hale is an adjective that means healthy and a verb that means to compel to come to court.