Home » Youth or Youths – Which is Correct?

American culture tends to idolize youth. At this stage of life, the possibilities seem endless, and people are bold, vigorous, and attractive.

The English language itself seems to have a fascination with the word youth; it can be used in at least three different ways—and can even be pluralized to youths. It can be difficult for beginning writers and language learners to sort through all of these options.

What is the Difference Between Youth and Youths?

In this post, I will compare youth vs. youths. I will use each of these words in at least one example sentence, so you can see how it appears in context.

After that, I will advice you on the use of these two words and offer a few alternatives that might avoid their use altogether.

When to Use Youth 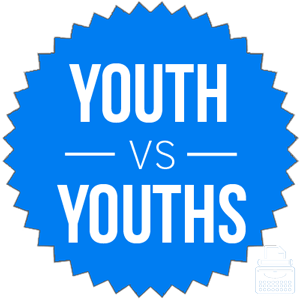 What does youth mean? Youth is a noun with several meanings. It can refer to the time in a person’s life before adulthood.

What is the plural of youth? Youth can also be a plural noun, where it refers to the young people of a society.

In this usage, youth is a mass noun. It refers to all the young people at once; the same way water can refer to all the water in the sea at once.

Other times, youth is a singular noun, where it refers to a young person, usually a male. The sentence below is an example.

When to Use Youths

What does youths mean? Youths is the plural form of youth in the sense of a singular boy or young man. One might be likely to see this word in police reports or used farcically for comedic value.

The plural form of the sense of a young man is the only proper use of youths. All of the other senses are either already plural or collective nouns.

Remember the Difference: Youths vs. Youth

Youth will almost always work. Youths is only appropriate in the sense of more than one young person, especially a young male. If you need to use the word this way, it will probably be less confusing for your audience to use a more familiar term like teenagers, boys, or young adults instead.

Still, if you must use youths, remember that it’s –s suffix designates it as a plural, much like the –s at the end of boys.

Is it youths or youth? Youth has many overlapping senses as a noun, all dealing with the period in a person’s life before adulthood.