If something happens twice in the same week, does it happen bi-weekly or semi-weekly? What about an event that occurs once every other week?

These questions of semi-weekly vs. bi-weekly are not quite as simple as they would seem. It has become common practice, especially in informal writing and spoken English, to use bi-weekly in each of these situations. Strictly speaking, this usage is incorrect.

The prefixes bi- and semi- modify the adverb weekly in different ways. Bi-weekly and semi-weekly are not interchangeable, despite what you might hear in everyday English.

So which of these words is which? There is an easy way to cut through the confusion by remembering other words that use these same prefixes, and have obvious meanings.

What is the Difference Between Bi-Weekly and Semi-Weekly?

In this post, I will compare bi-weekly vs. semi-weekly. I will include some example sentences so that you can see each term in various contexts.

I will conclude by giving you a memory tool that helps when you need to choose semi-weekly or semi-weekly.

When to Use Bi-Weekly

What does bi-weekly mean? Something that occurs bi-weekly occurs every other week, in other words, once every two weeks.

The prefix bi- means two: a bicycle has two wheels, and a binary star system is two stars orbiting around each other.

Here are some examples of bi-weekly in a sentence,

When to Use Semi-Weekly

What does semi-weekly mean? Something that occurs semi-weekly, by contrast, occurs every half-week, or twice a week.

The prefix semi- means half. A semicircle is half of a circle. Likewise, something that is semitransparent is halfway transparent. 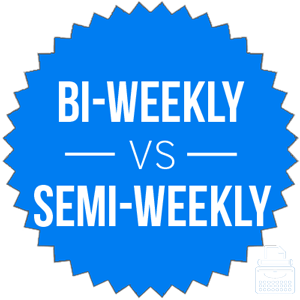 Bi-weekly and semi–weekly are confusing because many people use bi-weekly to mean twice a week (when they should use semi-weekly instead).

This pattern has become so common as to have entered the lexicon as an established usage. Some experts recommend avoiding bi-weekly (and similar constructions, like biannual) to minimize confusion. You might use every other week or every two weeks instead.

Still, bi-weekly and semi-weekly are shorter and simpler, two good qualities to have in one’s writing. If you can be reasonably sure that your readers will not misunderstand your meaning, use bi-weekly to mean every two weeks, just like a bicycle has two wheels.

You can remember that the word semi is cutting the week in half, hence semi-weekly means twice a week.

Is it bi-weekly or semi-weekly? Some writers use bi-weekly when they really mean semi-weekly, which has led to confusion because it happens so often.

Some sources recommend avoiding the terms altogether and using twice a week and every other week instead.