By some accounts, English has as many as 227,000-recorded words. With so many options, it should come as little surprise that some of them have fairly similar meanings.

Depository and repository are two such words: they have very similar meanings to go along with nearly identical spellings. Especially for writers unfamiliar with the nuances of specific writing contexts, choosing one or the other of these nouns could be confusing.

Despite their similarities, there are clear contexts when one or the other of these words is preferable. Continue reading to learn about the differences between these confusing words.

What is the Difference Between Repository and Depository?

In this article, I will compare repository vs. depository. I will use each of these words in several example sentences, so that you can see how they appear in context.

I will also show you a memory tool that allows you to easily choose repository or depository correctly each time, so you will always know which to choose for your own writing.

When to Use Repository 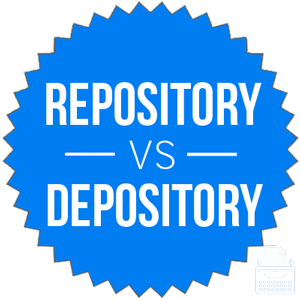 What does repository mean? A repository is where things are placed for safekeeping. It is a noun. The things in question can be either concrete or abstract: a library, for example, could be thought of as a repository for both books (concrete) and knowledge (abstract).

Repository has been part of English since the 15th century.

When to Use Depository

What does depository mean? A depository is also where things are place for safekeeping. In this sense, the meanings of depository and repository overlap.

Depository is not as old as repository; it was first recorded in the 17th century. Its root is deposit, which is related to a Latin verb that means to put away.

A writer could be forgiven for confusing these related words, since their meanings have significant overlap. In actual usage, depository is reserved for financial contexts.

Remember Depository vs. Repository: Since depository is related to deposit, which is a common banking term, you should have little trouble linking this word to financial contexts in your mind.

Is it depository or repository? Depository and repository are both nouns that mean a place to put things. While they can be synonyms, depository is only used in contexts involving depositing money.

If you are writing in a professional context involving finance, be sure to know the difference between these terms before you write.