Brief and debrief are verbs with a confusing relationship. Based on the structure of debrief, they would appear to be opposites. But if brief means short, does debrief really mean long?

Actually, it does not. The sense in which these words are related does not involve the length of something. Continue reading to learn more about these confusing words.

What is the Difference Between Brief and Debrief?

In this post, I will compare brief vs. debrief. I will use each word in several example sentences that shows you how it should appear in context.

Plus, I will share a memory tool that makes choosing either brief or debrief much easier next time you need one of these words.

When to Use Brief 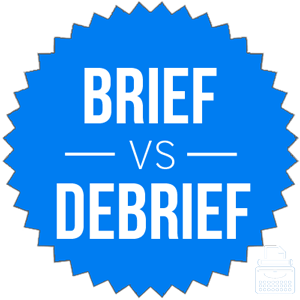 What does brief mean? Brief can be an adjective, a noun, or a verb.

As an adjective, brief means short, like in the sentence below,

As a noun, brief means a summary or short statement.

As a verb, brief means to prepare someone by informing him or her of necessary information.

When to Use Debrief

What does debrief mean? Debrief is a verb. It means to question someone after the completion of an assignment. A spy will often debrief with his or her superiors after returning from the field, for example.

Debrief can also function as a noun where it simply means a series of questions about a completed mission of assignment. This relates to the verb definition.

Debrief is a relatively young word in the history of English and was first recorded in 1944. Its origins are unknown. This period in world history was fraught with tensions, and World War II saw heavy use of spies. It is easy to speculate that this word sprang from the geopolitical tensions of the time.

Trick to Remember the Difference: Debrief vs. Brief

With verbs, the situation is a little trickier.

Debrief and interrogate both have two E’s, so you can use this fact to pair the two in your mind.

Is it debrief or brief? Brief can be an adjective, a noun, or a verb. As a verb, it means to give someone a summary. Debrief is a verb that means to interrogate someone. Though they are related, they are not interchangeable, and you must use each carefully.