Homophones are words that are pronounced the same but still have different meanings and spellings. All languages have homophones, and English is no exception.

Ordinance and ordnance are homophones, or near homophones at least, depending on whether the speaker pronounces ordinance with two syllables or three. Regardless of their pronunciation, however, they are two separate words with distinct meanings. One refers to a law passed by a legislative body; the other is a type of military equipment.

Continue reading to learn more about the differences between these two confusing words.

What is the Difference Between Ordnance and Ordinance?

In this post, I will compare ordnance vs. ordinance. I will use each word in several example sentences, so you can see how they appear in context.

Plus, I will show you a helpful memory tool that will make choosing either ordnance or ordinance easier in your own writing.

When to use Ordinance 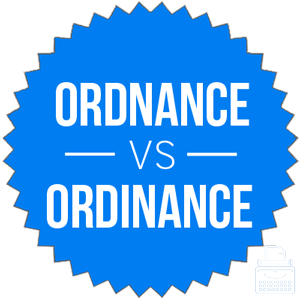 What does ordinance mean? Ordinance is a noun. An ordinance is a law passed by a city or town. These laws can involve almost anything, including parking regulations or rules about whether or not glass bottles are allowed in city parks.

Historically, ordinance has also referred to laws enacted at higher levels of government.

One example is the Northwest Ordinance of 1787, which created the Northwest Territory of the United States (the area now covered by Ohio, Indiana, Illinois, Michigan, Wisconsin, and parts of Minnesota). Today, though, ordinance is mostly reserved for local laws and statutes. It is rarely used in British English, where they more often use the term bylaw.

Ordinance is a Middle English word that came from Anglo-French and can be traced even further back to Medieval Latin.

When to Use Ordnance

What does ordnance mean? Ordnance is also a noun. It refers to artillery and other heavy weaponry or a service of the army that manages such equipment.

While ordnance is a broad category of weapons and ammunition, it is often used simply as a synonym for guns or artillery.

Here are some sentences that include the word ordnance,

These words only have one letter’s difference between their spellings, which makes them difficult to keep straight. Luckily, there is an easy trick to remembering the difference.

Ordinance vs. Ordnance Check: Ordinance contains the letter I, like the word illegal. If you disobey an ordinance, you are committing an illegal act. This extra letter is the key to remembering the meaning of the word ordinance.

Is it ordinance or ordnance? Ordinance and ordnance are homophones or near homophones at least.

While both words are nouns, they can never be substituted for each other, so remembering the difference is important.