Most English verbs are regular. They follow a predictable pattern of conjugation. But some English verbs don’t follow the same pattern. They are called irregular verbs.

Choose is an irregular verb that tends to confuse new writers and people learning English. It doesn’t follow the same rules as most verbs, but once you learn the rules it does follow, it’s easy to know whether you should use choose or chose, depending on context.

What is the Difference Between Choose and Chose?

In this article, I will compare choose vs. chose. I will use each of them in a sentence, and, at the end, I will give you a helpful trick use when you need to determine whether to use chose or choose in your own writing.

When to Use Choose

What does choose mean? Choose (pronounced chooze) is a verb that means to pick one thing over another.

Choose is the simple present tense form of this verb. With a helping or auxiliary verb like will or should, choose becomes the simple future form as well.

One might choose which sandwich to order from a restaurant, or which night to go out with friends, or which person to marry.

When to Use Chose

What does chose mean? Chose (pronounced choez) is the simple past tense form of the verb choose.

Use chose to describe a decision that happened in the past, like in the following examples,

When to Use Chosen

What does chosen mean? The same verb to choose becomes chosen as a past participle, and in past perfect form with an auxiliary verb.

Use past perfect tense to describe a past event that happened before a related event. Use a past participle to modify a noun, much the same way you would use an adjective. See the sentences below. 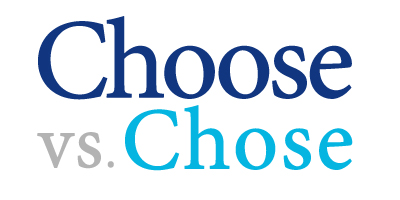 Here is a helpful trick to remember chose vs. choose.

Chose and choose are difference tenses of the same verb to choose.

If you are speaking about a decision that was made in the past, use chose. If the decision currently being made or will be made in the future, use choose. Since choose shares a double O with the word soon, it should be easy to remember to save choose for these contexts.

Is it choose or chose? These two spellings represent different tenses of the same verb.

You can remember to use choose in the future tense since that word and soon both have a double O.

I hope this article helped you understand the differences between choose and chose. You can always reread it if you need a refresher.