Home » Sometimes vs. Some Times – What’s the Difference?

Adverbs are words that modify verbs by describing how, when, or where they happen.

It’s not always easy to pick out an adverb. Some words modify verbs even when they don’t appear to be doing so, like sometimes.

Should you use sometimes or some times when you want to describe something that only happens once in a while? Continue reading to learn more.

What is the Difference Between Sometimes and Some Times?

In this post, I will compare sometimes vs. some times. I will use these words in several example sentences—this way, you will be able to see the words in context.

Then, I will demonstrate a mnemonic device that makes choosing sometimes or some times easier.

When to Use Sometimes 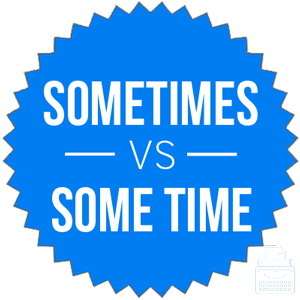 What does sometimes mean? Sometimes is an adverb. The word sometimes describes when an event takes place. You can think of it as a synonym of adverbs like occasionally and the phrase now and then.

If something happens sometimes, it happens often enough to be worth mentioning, but it is not happening constantly.

Sometimes is a compound of the words some and times, where some is an adjective that describes an unspecified quantity, and times is a noun that refers to points in a person’s experience of life. Compounds happen when two words which are frequently used together gradually come to be spelled as a single word.

According to Merriam-Webster, the word has been part of English since the 14th century.

When to Use Some Times

What does some times mean? You are also free to use the words separately, as in the phrase some times.

Some times is a noun phrase, rather than an adverb, and it means a nonspecific quantity of points in a timeline. Someone might ask his or her colleague for some times that would work to get together and talk about the quarter-end finances, for instance.

The phrase some times and the compound sometimes are different parts of speech, so you will need to know when to use each.

Is it some times or sometimes? These two words are never interchangeable.