There may come a day when a person will be able to order cocktails delivered to his or her door. If this day ever comes, you will want to be prepared with the appropriate spellings for all your favorite drinks so as not to confuse these futuristic mobile mixologists.

In this post, I will compare old-fashion vs. old-fashioned. I will use each variation in at least one example sentence, so you can see how it appears in the proper context.

Additionally, I will demonstrate the use of a mnemonic device that makes choosing either old-fashion or old-fashioned easier in your own writing.

When to Use Old-Fashioned 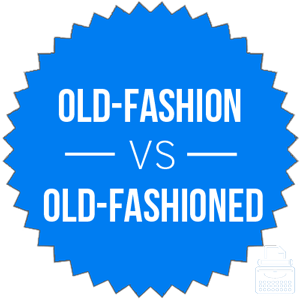 What does old-fashioned mean? Old-fashioned is an adjective phrase. Adjectives modify nouns by describing their qualities. This one describes something archaic, antiquated, or simply not up to date.

Most writers hyphenate this phrase, forming old-fashioned. This usage follows standard hyphenation conventions for adjectives used directly before the nouns they modify.

Old-fashioned can also be a noun, where it is the name of a classic whiskey-based cocktail.

Let’s look at the following example,

When to Use Old-Fashion

What does old-fashion mean? Old-fashion is a variant of the same phrase, but it is seldom used, especially since 1900.

The chart below shows the relative usage of old fashioned vs. old fashion and the hyphenated old-fashioned in English since 1800.

As you can see, old-fashioned (hyphenated) is the clear favorite. Old fashioned comes next, probably due to its occasional use as a noun. The use of old fashion has steadily declined since 1900 (from an already low starting point) to almost zero today.

As an adjective, the hyphenated old-fashioned predominates over the other options by nearly an order of magnitude. It is the clear choice here.

Old fashion is almost never used, unless you were literally describing fashion that is old. Otherwise, avoid this spelling.

Since both adjective and drink contain the letter D, and old-fashioned has an extra D, it is easy to remember to spell the word this way in most contexts.

Is it old-fashioned or old-fashion? Old-fashioned is an adjective that describes something outdated or archaic. It is also the name of a whiskey cocktail, which occasionally appears as old fashioned.