Languages have so many words that some of them are bound to be similar. In English, words that sound alike but do not mean the same thing are called homophones.

Homophones can be confusing, and in their misuse, hilarity sometimes ensues. If you write that someone was swept away by the currant and you aren’t relating a cautionary tale of drunken misadventure, then you had probably better read the rest of this article to find out why these words are different.

What is the Difference Between Current and Currant?

In this article, I will compare current vs. currant. As part of this comparison, I will use both words in a few example sentences to illustrate the proper context.

Plus, I will demonstrate a useful trick that you can use to help you remember whether you mean current or currant.

When to Use Current

What does current mean? Current, the more common of the two words, can be an adjective or a noun.

As an adjective, current refers to something that is in the present.

As a noun, current refers to the movement of a running body of water or flowing electricity.

The word also has a metaphorical sense, in which it can refer to anything that flows, like a conversation or a steady influx of money.

See the below sentences for examples,

When to Use Currant

What does currant mean? A currant is a small, seedless fruit. Currants are a popular cooking ingredient and can also be used to make wine.

Below are some examples of currant used in a sentence, 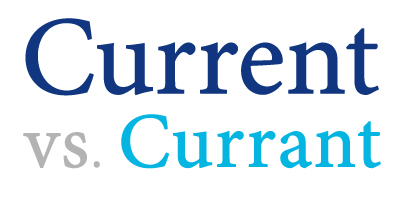 Here is a helpful trick to remember currant vs. current.

Both currant and current can be used as a noun, but only current is also an adjective. If you are trying to use the word as an adjective, then your choice is clear. Use current.

Since both of these words can be used as a noun, the choice is more difficult. Remember that currant, spelled with an A, and it is something that you eat. Eat and currant both contain the letter A.

Is it current of currant? Current and currant are nouns, but only current is an adjective, as well.

Since currant and eat are spelled with the letter A, you should have little trouble remembering the appropriate context for the word currant.

Also, current and electricity are spelled with the letter E.