You have probably seen rural workers portrayed in the American media in a somewhat negative light. Redneck stereotypes in American culture have been enduring and popular, to the extent that they are one of the most recognizable tropes in contemporary American media, and they function as a stand-in for all Americans in some international media, as well.

What is the Difference Between Hillbilly and Redneck?

In this post, I will compare redneck vs. hillbilly. I will use each word in some example sentences that will give you an idea of how they should appear in context.

Then, I will show you a mnemonic device that anyone can use when choosing either hillbilly or redneck.

When to Use Redneck 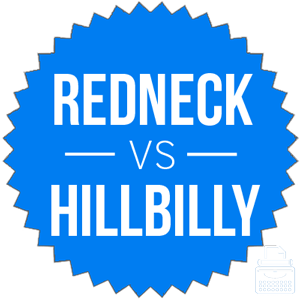 What does redneck mean? Redneck can be used a noun or an adjective. It has a few different, but related, meanings.

The original term redneck was used to refer to a working-class white person. The term became widely used in the early half of the 20th century and is based on the distinctive tan line or sunburn field workers sometimes get on the backs of their necks.

In the modern parlance, redneck is used in a more common sense to describe a rural American stereotype. As the stereotype goes, a redneck is a person from a small town in the southern United States with minimal education and a blue-collar job. Rednecks are often portrayed as ignorant and offensive, with viewpoints and mannerisms that might be considered socially unacceptable.

It is used in a derogatory fashion by urban dwellers and the upper classes, but many self-described rednecks wear the term proudly.

Here are some examples of redneck as a noun,

Redneck can be an adjective, as well, where it describes any of the qualities associated with this stereotype, like ignorance, poor hygiene, low educational achievement, and a preference for country music.

The sentence below is an example,

Redneck is generally considered a derogatory term, so it is not appropriate for polite, professional English.

When to Use Hillbilly

What does hillbilly mean? In many cases, hillbilly can be used as a synonym for redneck. It carries most of the same connotations, and you could substitute hillbilly for redneck in the sentence examples from the previous sections without much loss in meaning.

Redneck began as a reference to the working class in the south, whereas hillbilly originated in the remote regions of the Appalachians. This is a possible distinction between the two.

While the both refer to people from rural, unpopulated areas, hillbilly has a more remote connotation to it.

According to the Oxford English Dictionary, hillbilly comes from the nickname from the given name William. Billy is a shortened form of William, so a hillbilly is a man (possibly named Billy) who lives in the hills (or another outlying rural area).

Some readers might see hillbilly as a more gently derisive term than redneck, but any difference is one of degree, rather than actual meaning. A hillbilly is still a poorly educated person from a small rural town, probably with poor social skills and uninspiring career prospects. The term is still chiefly a derogatory insult that is not found in polite English.

For what it’s worth, the chart below graphs the usage of hillbilly vs. redneck since 1800,

Both words have only gained popularity since roughly 1920. Hillbilly has seen consistently higher usage, possibly due to its perception as the milder of these terms. Either way, this chart is not exhaustive in its literary scope, since it looks only at books published in this time frame, and no other sources.

Still, it is a good snapshot of these words’ usage.

When to Use Hick

What does hick mean? Hick is another term with a similar meaning. It refers to a person living in the country, who is regarded as unintelligent or provincial.

Unlike redneck and hillbilly there is no association with a region or geographic area when this term is used. It does not refer to the South or the Appalachians.

A common use of hick is when describing a small, country town.

While the dictionary doesn’t label this term as explicitly derogatory or offensive, most people would be insulted if you called them a hick.

In modern contexts, these words are synonyms. You might choose hillbilly to describe someone from an especially remote region, but aside from this consideration, there is no real reason to choose one over the other besides personal preference.

Both terms are derogatory and even considered to be racial slurs, so they are not words you will want to use in polite company.

Some readers may find hillbilly less derogatory than redneck, and it is also more common, so it might be a better choice if you are concerned about these issues. Since hillbilly rhymes with silly, you should have little trouble remembering that hillbilly is more silly than nasty.

Is it redneck or hillbilly? Hillbilly and redneck are two synonyms that denote a negative stereotype of rural people in America.