Imaginary and imaginative are two English adjectives that are similar enough that some writers get them confused. They both stem from the root word imagine, which is a verb that means to envision things that may not be the case. They mean different things though, and the careful writer will know the correct situations in which to use each of these words.

What is the Difference Between Imaginative and Imaginary?

In this article, I will compare imaginative vs. imaginary. I will show you the words in context by using each in at least one example sentence. Plus, I will tell you an easy way to remember whether something is imaginative or imaginary.

When to Use Imaginative

What does imaginative mean? The word imaginative is an adjective. When something is imaginative, it is creative or fanciful, like a science-fiction film or the stories told by children.

Thus, to be imaginative is to use one’s imagination.

I have included a few example sentences here,

When to Use Imaginary

As a result, to be imaginary is to be a product of the imagination. 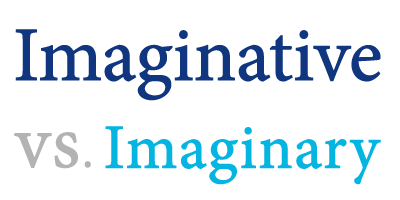 Now, let’s take a look at how we can remember imaginary vs. imaginative.

These words are similar, but they mean different things. Critics may disagree whether a film is imaginative, but none who have seen it would call it imaginary. To be imaginary is to not exist in the real world.

Since imaginary things don’t exist, you can remember that the word imaginary rhymes with fairy, a creature that does not exist. This way you will always be able to remember the meaning of this confusing word.

Is it imaginary or imaginative? Imaginary and imaginative are adjectives.

Imaginative people use their imaginations; imaginary people are products of the imaginations of others.

Fairies are imaginary beings. By rhyming fairy with imaginary, you will always be able to remember the meaning of the word imaginary.

These words are confusing, but now that you’ve taken the time to learn about them, you will never mix them up again. Be sure to check this site next time you discover another set of confusing words.