Many British English words that end in -our lose the U when they cross the pond into American English, like odour, colour, honour, etc. The word glamour also has an alternative spelling where it drops its U to become glamor.

So, by extension of the same rule, should you use glamour with British audiences and glamor with American audiences? Not so fast—the answer is a bit more complex than that, and it might surprise you.

What is the Difference Between Glamor and Glamour?

In this post, I will compare glamor vs. glamour. I will use each of these words in at least one example sentence, so you can see how they appear in writing.

Plus, I will show you a memory tool that will make choosing either glamor or glamour much easier.

When to Use Glamour 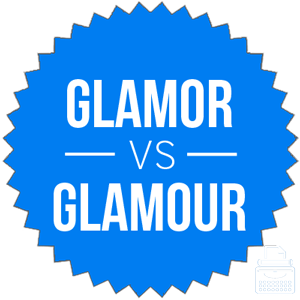 What does glamour mean? Glamour is a noun. It means an exciting and romanticized attractiveness. Red carpet events feature many glamorous guests, for example, and the glamour of a royal wedding is not easily surpassed.

The women’s issues publication Glamour takes its name from this word. Glamour also has an outdated use as a spell or enchantment, though most modern speakers do not use the word this way.

How do you spell glamorous? The associated adjective is of glamour is spelled glamorous.

Interestingly, glamour is derived from a Scottish term that was invented to differentiate magic from education. At the time, higher learning was so inaccessible to the general populace that the study of grammar was akin to the study of enchantment, and so the Scots invented the word glamer to separate the two concepts.

When to Use Glamor

What does glamor mean? Glamor is an alternative spelling of the same word. It is more common in American English than British English, though it is not as popular as glamour in either case.

Here are a few charts that show the relative usage of glamour vs. glamor in both language communities.

Glamor is probably derived from an overgeneralization of American English spelling conventions, which often drop the U from words ending in -our in British English, such as humour and labour. It could also stem from a backformation of the dropped U in the adjective from glamorous.

No matter which language community you are a part of, glamour is the standard spelling. While glamor appears sometimes in American English and rarely in British English, both communities prefer glamour.

Since both USA and UK contain the letter U, it is easy to remember to use glamour with both of these audiences.

Is it glamour or glamor? If something is glamorous, it has beauty and charm.

Stick to glamour in your own writing.