Home » Childcare or Child Care – Which is Correct?

Many families cannot afford to have a parent stay home with children—there may be only one parent or both adults may need to work to financially support the family. Childcare services make these arrangements possible, although they may not always be cheap.

But should the word be a compound noun, like childcare, or a noun phrase consisting of two separate words, like child care?

At first glance, it may not seem to make much difference, but depending on where you live in the world, your readers may expect one form or the other. The choice between them becomes important.

What is the Difference Between Childcare and Child Care?

In this post, I will compare child care vs childcare. I will use each of these words in at least one example sentence, so you can see how it appears in context.

Plus, I will show you a memory tool that you can use to choose child care or childcare correctly for your own writing.

When to Use Child Care 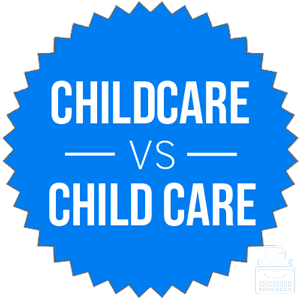 Is childcare two words? Child care is a noun phrase. It refers to a service whereby one person looks after the offspring of another person. Many colleges and universities offer child care on site, and most Christian churches have nurseries and Sunday schools that provide child care while parents attend sermons.

When to Use Childcare

Is child care one word? Childcare is an alternative spelling of the same noun. It can be used in all the same contexts as its two-word cousin. You could replace child care in the sentences above with childcare without changing the meaning of the sentence.

Child care predominates in American English, while childcare is more common in British English. Other than that, the two forms are interchangeable.

As with so many compound nouns, hyphenating child care to form child-care forms an adjective, whereby child-care describes a quality of another noun, like in the phrase child-care facilities.

The difference between these terms is so slight that it comes down to the language community to which a writer belongs.

Is it childcare or child care? Child care and childcare are alternative spellings of a noun that means a service where one person watches someone else’s kids.

The forms are interchangeable in meaning.