If you have ever taken a course in microbiology, you have probably heard of DNA and RNA. Depending on how long ago you took the class, you might not remember the specifics of exactly what each term means.

DNA and RNA both refer to genetic molecules, and they are actually so closely related that they require each other to function correctly. Still, they are different enough that you need to use each term correctly, especially in the context of biology and other sciences.

What is the Difference Between DNA and RNA?

In this post, I will compare DNA vs. RNA and use each in a sentence to show you how it appears in context.

Plus, I will share a useful mnemonic that will help you choose either DNA or RNA correctly for your own writing.

When to Use DNA 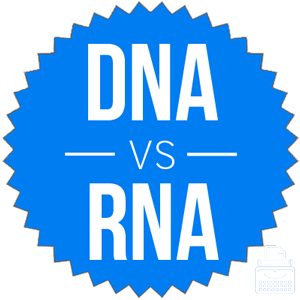 What does DNA mean? DNA is an initialism (see acronym vs. initialism) for deoxyribonucleic acid, a genetic material present in nearly all living organisms. DNA carries the genetic information that determines individual characteristics of people, animals, and plants.

Here is an example sentence,

DNA is also used in a figurative sense to describe the characteristics of a person or living being. 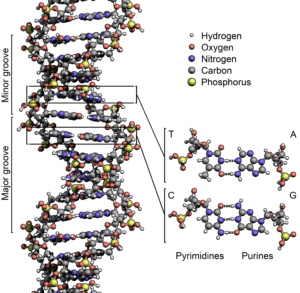 In either sense, DNA functions as a noun in sentences.

DNA molecules are arranged into strands that twist around each other in a helical shape. If you were to look at a strand of DNA under a microscope, it would look something like the picture to the right.

The smallest unit of information in a DNA molecule is called a base pair. Humans have over three billion base pairs. Scientists have estimated that if all of the DNA in the human body were arranged in a straight line, it would be long enough to stretch from the earth to the sun and back 100 times.

When to Use RNA

What does RNA mean? RNA is also an initialism. It stands for ribonucleic acid. RNA is an important molecule in cellular biology. It controls many processes at the cellular level, including protein synthesis and some functions related to genetic coding.

Unlike DNA, which is known for its double-helix shape, RNA is a single-stranded molecule. It is usually found in nature as a single strand folded onto itself. The primary purpose of RNA is to act as a messenger carrying instructions from DNA for controlling the synthesis of proteins.

RNA or DNA? When to Use Which

DNA and RNA are both macromolecules, but they have different functions.

RNA vs. DNA Check: Since DNA determines individual characteristics, and determiner begins with the letter D, it should be easy to remember that DNA is the determiner of genetic expression.

Also, you can remember that DNA has a different shape that RNA to differentiate the two. DNA has a double-helix shape. DNA and double both start with D.

Is it RNA or DNA? RNA and DNA are both macromolecules that play important genetic roles in cellular biology.

While the two molecules are related, and cannot function without each other, they are different. Biologists and other scientific writers must be sure to know the difference between them.