Many a baker has puzzled over the difference between meal and flour and wondered whether they are interchangeable in recipes.

In many cases, the answer to the second question is yes, they are interchangeable. Most of the time, the difference between meal and flour is a difference of degree: meal is just coarser flour, and flour is finer meal.

There are some exceptions, though. Corn is used to make many products, both in and out of the kitchen and the wider food industry. Corn meal is simple enough, but depending on who wrote the recipe, corn flour could be confusing. In England, however, substituting corn flour for corn meal could ruin your delicious weekend pancakes.

Continue reading to find out why.

What is the Difference Between Corn Flour and Corn Meal?

In this post, I will compare corn meal vs. corn flour. I will use each term in an example sentence, so you can see how they appear in context. I will also show you a memory tool that helps make choosing corn flour or corn meal a little easier.

When to Use Corn Meal

What is corn meal? Corn meal is a powdery ingredient made from ground-up kernels of grain. It is an important food ingredient in several cultures, and it goes by many different names in many different languages.

Corn meal can also be written as one word: cornmeal.

When to Use Corn Flour

What is corn flour? Some British English speakers use corn flour to refer to a product also sold as cornstarch, which is another corn derivative that is used to thicken liquids.

Most of the time, though, flour and meal are similar: flour is more refined and more finely ground than meal, which is coarser and may also contain skins or other parts of the grain.

Sometimes, the only distinction is the texture of the finished product. Many supermarkets don’t distinguish between almond flour and almond meal, for instance, and sell almond meal as “almond flour/meal.” They are interchangeable in most recipes, and using meal instead of flour usually just makes the pancakes (or whatever) slightly grainier than usual. 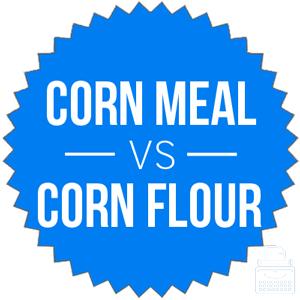 Corn meal is a powder made from ground-up kernels of corn.

We might expect corn flour to be a similar product, but British speakers use corn flour to refer to the product known as cornstarch in America.

Corn Flour vs. Corn Meal Check: Flour and starch both contain the letter R, so using corn flour to refer to a product made from the starch of corn kernels shouldn’t be difficult.

Is it corn meal or corn flour? Corn meal is a powder obtained by grinding kernels of corn into tiny pieces. Corn flour is the British word for the product Americans call cornstarch, made from the starch of corn rather than ground-up kernels.