Now that the majority of English speakers no longer own or work on farms, the usage of farm-related terminology has dwindled. Words like plough and plow are no longer used on a daily basis by most English speakers, like they may have been during an earlier time.

Thus, it is natural that some writers are unfamiliar with the difference between plough and plow. As we will see, the words are more closely related than we might expect.

What is the Difference Between Plough and Plow?

In this post, I will compare plough vs. plow. I will outline when it is appropriate to use each spelling and in what language community it dominates.

Plus, I will show you a mnemonic device that makes choosing plough or plow a bit easier.

When to Use Plough 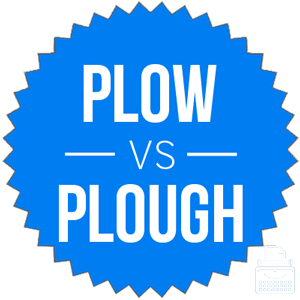 What does plough mean? Plough can be a noun or a verb.

As a noun, plough means an implement used for tilling the earth. Its meaning as a verb, namely, to till the earth, is related. Farmers plough their fields, and the object they use to accomplish this feat is also called a plough.

In this sentence, plough is a noun,

In these sentences, though, plough is a verb:

Plough is the standard spelling of the word in British English.

When to Use Plow

What does plow mean? Plow is the American English spelling of the same word. It can be used in all of the same contexts, and it carries the same meanings.

Also, you could substitute plow for plough in any of the example sentences in the previous section without changing the meaning of the word.

These charts show the relative usage of plow vs. plough in American and British English, respectively.

As you can see, the usage of both of these terms has fallen sharply since the Industrial Age.

Also, it should be noted that these charts aren’t exhaustive in their scope, since they rely only on English book, to the exclusion of other print sources. Still, they clearly show a long-term usage trend in both language communities.

These words are interchangeable in meaning. Which one you choose depends on the nature of your audience.

Since plough has an extra U, like United Kingdom, it should be easy to remember that plough is the British spelling of this word.

The presence of a U also follows many other British, American spelling differences: color/colour, favor/favour, honor/honour, etc.

Is it plow or plough? Plow and plough are alternative spellings of the same word. As a noun, they mean a farm implement, and as a verb, they mean to till the earth.