Let’s say you are an American oil baron in the early 20th century, and you need to book a luxury trip across the Atlantic Ocean to Europe. Should you book an ocean liner, a blimp, or a zeppelin?

Ocean liners are slow, and if they sink, you will probably drown. That leaves you with two choices: a blimp and a zeppelin.

But aren’t a blimp and a zeppelin the same thing? No, they are not, and if you want to survive your trip, you had better know the difference between them.

What is the Difference Between a Blimp and a Zeppelin?

In this post, I will compare zeppelin vs. blimp. I will outline the definition of each and use the word in a few example sentences to demonstrate its meaning.

Plus, I will show you a helpful memory tool that will make choosing either zeppelin or blimp easier for your own writing.

When to Use Blimp 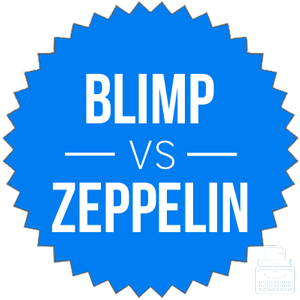 What is a blimp? Blimp is a noun. A blimp is a type of aircraft. If you are a football fan, you have probably noticed the Goodyear blimp either on TV or in person at a game.

Blimps are basically large, contoured balloons with fins and an engine. When inflated, they are lighter than air, which allows them to float and be steered by the engine.

Here are a few examples of blimp in a sentence,

When to Use Zeppelin

What is a zeppelin? Zeppelin is another noun. A zeppelin is also an aircraft.

A zeppelin is like a blimp, save one crucial difference: while blimps are basically giant balloons, zeppelins have an internal metal framework that maintains its shape even when not filled with gasses. This makes them able to withstand harsher weather conditions than blimps.

In the early 20th century, zeppelins were filled with hydrogen, which is lighter than air and allowed the aircraft to float. Hydrogen is very flammable, though, and the most famous zeppelin in history, the Hindenburg, was destroyed in a fiery disaster that killed over 30 people.

Today, such airships are filled with helium.

Blimps and zeppelins have many similarities, but many differences as well. You need to be aware of these differences so that you can accurately describe the various examples of antiquated airships at trendy cocktail parties.

Thus, as long as you can remember at least one Led Zeppelin song at any given time, you will know the difference between these types of airships.

Is it zeppelin or blimp? Blimps and zeppelins are means of air transport.

Both are archaic and impractical as methods of travel, but now you know the difference between them.