If you can see something coming, is its arrival imminent or immanent?

These words are homophones, which means they sound alike but have different meanings and are not spelled the same. Homophones have been the bane of many writers’ existence since the dawn of written language.

If you don’t know the difference between imminent and immanent, you are certainly not alone, so keep reading and don’t get discouraged.

What is the Difference Between Imminent and Immanent?

In this post, I will compare imminent vs. immanent. I will use each of these words in at least one example sentence, so you can see how they appears in context.

I will also show you a mnemonic device that will help you choose either immanent or imminent correctly every time.

When to Use Immanent 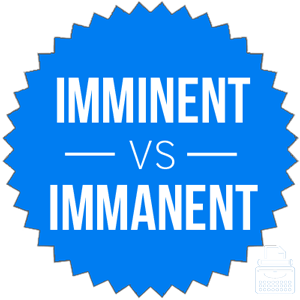 What does immanent mean? Immanent is an adjective. It is a synonym of inherent, in that it means contained within or existing as part of something.

Immanent comes from the present participle of a Latin verb meaning to remain in place. Immanent was first recorded in English in the mid-16th century.

When to Use Imminent

What does imminent mean? Imminent is also an adjective. It means about to happen. It is not the same as inevitable, which means unable to be stopped from happening. That said, many things which are imminent are also inevitable.

Like immanent, imminent stems from the present participle of a Latin verb. In this case, the original verb meant to project or threaten.

When to Use Eminent

Immanent and imminent have a near homophone, eminent. Depending on how speakers pronounce the first vowel of eminent, it can sound the same as these two words.

Eminent means famous or respected, and can also be used to emphasize a positive quality. It is also the root of the adjective preeminent, which means exceptional or very distinguished.

Since these two words are homophones, they can be confusing.

Immanent vs. Imminent Check: Remember that immanent means inherent. Since mankind has many immanent characteristics, use man and immanent as a reminder of the meaning of this word.

Is it immanent or imminent? Imminent and immanent are adjectives that are homophones.

Another adjective, eminent, means famous or respected and is often confused with these words. Even though they are homophones, their meanings are all separate, and you can never swap one for another without changing the meaning of a sentence.