Home » Hurray or Hooray – Which is Correct?

Humanity is a joyful species. Before English was even spoken, people had many ways to express their happiness. Even infants vocalize their elation through exclamations and shouts. These barely count as language, but they still convey a clear, joyous meaning.

As adult English speakers, we have a few more options. We don’t need to yell at the top of our lungs to convey our emotion; we can simply use our words. One of the words English speakers use to communicate happiness or approval is hooray.

Hooray is just one of several ways to spell this word. Depending on your literary appetite, you may also have come across other versions, like hurray and huzzah.

Which spelling is correct? Let’s investigate.

What is the Difference Between Hooray and Hurray?

In this post, I will compare hooray vs. hurray. I will use each of these words in at least one example sentence, so you can see how they should appear in context.

Plus, I will show you a memory tool that makes choosing hooray or hurray much easier in your own writing.

When to Use Hooray 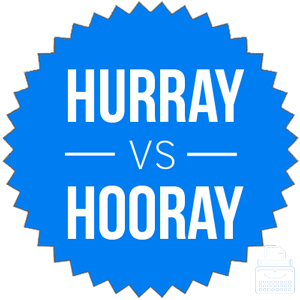 What does hooray mean? Hooray is an exclamation of joy or approval. A child might say hooray after opening a gift on Christmas, for instance. A sports fan might also yell hooray when his or her team does something good.

Here are a few more contexts where you might see this word,

No one really knows the origins of hooray. It’s possible that it comes from a similar German term. The English and German languages are no strangers, with English having a long and storied history of borrowing German words.

When to Use Hurray

What does hurray mean? Hurray is another version of the same word. They are interchangeable and can be used in all the same contexts to mean all the same things.

Of the two, hooray is the more widely used spelling.

The above chart graphs hurray vs. hooray over the last 200 years, and, as you can see, hooray is the more common spelling. This might be because hooray is a more phonetic choice than hurray, the latter of which could be confused with hurry.

Still, hurray and hooray are just two of several variations on this word, including hurrah and the older huzzah. While huzzah still sees occasional (often ironic) use, hurrah has largely fallen by the wayside in favor of hurray and hooray.

Today, hooray is slightly more common in all varieties of English. Both American and British English speakers are likely to prefer hooray. While hurray still appears, its usage is declining, and it may eventually join hurrah in obsolescence.

You could get away with using either of these terms, as they are both considered correct. Hooray is more common in all varieties of English, however, and is therefore a good default if you aren’t sure which to use.

Hooray has a double O, like good, so you should have no trouble remembering that hooray is a good choice, even if it might not matter at the end of the day.

Is it hurray or hooray? Hooray and hurray are two versions of a joyous exclamation.

Huzzah is a similar term that sees some ironic, modern use.