Home » Smartphone or Smart phone – Which is Correct?

Technological advancements shape the way that many people interact with the world around them. In ages past, fire, the wheel, automobiles, semiconductors, and personal computing defined human achievement for the majority of people.

Most people alive today would find it hard to identify an invention that changed their lives more than cell phones.

With their touchscreens, extensive capabilities, and sleek construction, modern cell phones have become a ubiquitous part of life in the developed world. When you are writing about them, should you call one a smart phone or smartphone?

What is the Difference Between Smartphone and Smart phone?

In this post, I will compare smartphone vs. smart phone and outline the primary spelling that you should use in your writing.

Plus, I will also share a simple memory tool that will make remembering the differences between these words easy.

When to Use Smartphone 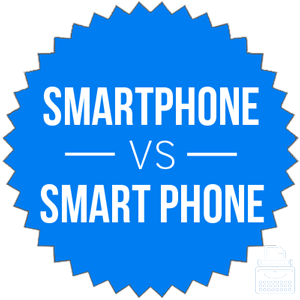 Smartphone is a noun. It refers to an electronic device that shares the capabilities of a telephone and a personal computer.

In the 19th and most of the 20th centuries, telephones were exclusively analog devices connected to expansive wired networks that grew to span the developed world. Eventually, some phones adopted cellular wireless technology and were called cell phones. These devices were still primarily telephones with some added digital features.

In 1999, the first smartphone debuted in Japan. By 2012, smartphone adoption exploded and over one billion devices were in use by the third quarter of that year. Today, more users own smartphones than own personal computers and use them as telephones, computers, cameras, GPS devices, and even mobile payment methods.

Here are a few examples of smartphone in a sentence,

When to Use Smart Phone

When smartphones were first introduced, the term was separated into two individual words, smart and phone. This noun phrase fulfilled the same grammatical function as smartphone, but is rarely used given the ubiquitous nature smartphones now have.

This pattern is common for new phrases and words in English, especially as they relate to technological advancements. New ideas are often expressed as separate words, like smart phone, electronic mail, or health care, before being hyphenated and eventually compounded into a single word.

Electronic mail, for instance, was shortened to e-mail before eventually becoming standardized as email. When people became familiar with the idea of phones that could do more than make simple calls, smart phone was shortened to smartphone.

Today, the compounded smartphone is the standard way to spell this word and outnumbers smart phone.

As you can see from the above chart, which graphs smart phone vs. smartphone over time, the one-word smartphone is the preferred spelling.