One of the most entertaining uses for language is to communicate to other people the exact degree of their intellectual failings. William Shakespeare set a high bar for creative insults in the 16th century, and, since then, English users have continued to find new and exciting ways to express disdain.

Still, the old standbys are perennially effective. Stupid and ignorant have stood the test of time, but do they mean exactly the same thing? Continue reading to find out.

What is the Difference Between Ignorance and Stupidity?

In this article, I will compare ignorant vs. stupid. I will use each of these words in at least one example sentence. Plus, I will show you a useful memory tool that will aid you in remembering whether to use ignorant or stupid in your own writing.

When to Use Ignorant

What does ignorant mean? The adjective ignorant describes someone who is lacking knowledge or understanding of a subject. If you are ignorant of a subject, you have little, if any, knowledge about it.

Strictly speaking, ignorance, or being ignorant, isn’t an insult; it’s simply a lack of understanding. Geniuses are ignorant to all sorts of things, but these people are not stupid; instead, they are ignorant. This is an important distinction to make.

When to Use Stupid

What does stupid mean? Stupid is another adjective; it means lacking in mental capacity. An ignorant person can usually seek additional knowledge to become less ignorant, but, as the saying goes, you can’t fix stupid.

In everyday language, stupid is often used to refer to anything the speaker or writer doesn’t like very much, like in this sentence,

The lack of a USB port can’t be stupid, strictly speaking, but many people use stupid informally in this way. 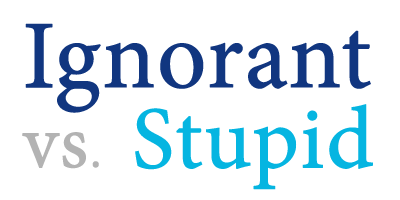 Here is a helpful trick to remember stupid vs. ignorant.

Neither of these words is a very nice thing to say to someone. If you must use them, however, remember to choose ignorant for someone who simply lacks knowledge. Stupid refers to someone who lacks brainpower.

To help you remember the difference between these words, and to introduce a note of positivity to a somewhat unfriendly topic, remember that someone who is ignorant can work to become informed, another word which begins with I. By linking these two adjectives together in your mind, you can remember the correct usage for ignorant.

Is it ignorant or stupid? Ignorant and stupid are adjectives.

Both words can be derogatory if used in hostility, so take care not to accidentally insult anyone when using them.

Since an ignorant person can become informed if they are diligent and willing to learn, you can use the shared I between ignorant and informed to help you remember ignorant’s meaning.