If humans tried hard enough, we could probably devise a language rich enough so that every word had a single meaning, separate from all other words, and they would all be pronounced distinctly from one another to avoid confusion.

Unfortunately, whoever invented the languages currently in use apparently did not try as hard as we would’ve liked. English, like other languages, has many words which are homophones—similar in pronunciation, but distinct in meaning.

Mantel and mantle are two such words. Even though they are both nouns, they refer to two different objects. Continue reading to find out whether you are trying to write about a mantle or mantel in your piece.

What is the Difference Between Mantel and Mantle?

In this post, I will compare mantel vs. mantle. I will use each word is a sentence to demonstrate its proper context. I will also explain a helpful trick to use when you can’t decide whether to choose mantel or mantle for your own writing.

When to Use Mantel

What does mantel mean? Mantel is a noun. A mantel is a structure of wood or stone build around a fireplace, on which decorative items are often displayed.

The word mantel has no other senses. It always refers to the structure or shelf that surrounds a fireplace or hearth.

When to Use Mantle

Mantle is also a noun. It refers to a loose robe or cloak. Here are some examples,

Mantle is also used in a metaphorical sense, to refer to responsibilities inherited from a predecessor, especially in positions of power. Here are some more examples, 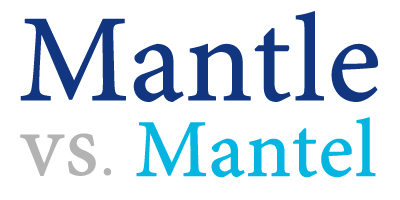 Since mantle and mantel are both nouns, remembering which is which can be confusing. Luckily, there is an easy way to keep them straight.

Trick to remember mantle vs. mantel: A mantel is a structure around a fireplace. One type of wood that you might burn in a fireplace is elm. Since mantel and elm are both spelled with the letters EL, it will be easy to remember when to use mantel.

Is it mantel or mantle? Mantel and mantle are homophones, but their meanings are distinct.

Since they are both nouns, picking the right word can be confusing.

Mantel and elm are both spelled with the letter sequence EL. Since elm is one type of wood that you might burn in a fireplace, you can use the relationship between these words to remember when to use mantel instead of mantle.

If all else fails, you can always check this article again for a quick refresher.