Home » MD or DO – What’s the Difference?

When you are seeking medical treatment, you want to be sure that you are obtaining the highest quality care possible. The world of healthcare can be difficult to navigate, however, and making medical decisions confusing and stressful.

Even choosing a doctor can be confusing. Doctors hold a variety of titles related to their training and specialty. Even at a basic level, primary care providers often have different degrees, like MD and DO.

What’s the real difference between these terms? Continue reading to learn more about them.

What’s the Difference Between MD and DO?

In this post, I will compare MD vs. DO and outline the differences between each abbreviation. I will also use each in an example sentence, so you will be able to see how they appear in their proper contexts.

Plus, I will share a helpful memory tool that makes it simple to remember whether MD or DO is the term you need.

When to Use MD 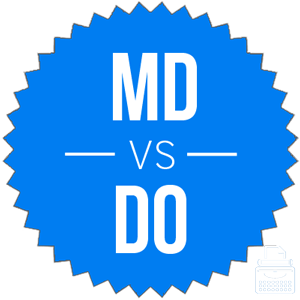 What does MD mean? MD is a college degree. It refers to doctor of medicine. Academia is fond of Latin, and the letters MD come from the Latin term medicinae doctor, which means the same thing.

Typically, a student earns an MD upon graduation from medical school. In the United Kingdom and countries which follow the UK system, the MD is bestowed in recognition of advanced research or as an honorary degree.

In general, students who wish to become medical doctors spend four years obtaining a bachelor’s degree, four more years in medical school, and at least three years of residency. Thus, doctors in the United States have been in training for over ten years before becoming independent physicians.

When to Use DO

What does DO mean? DO is also a college degree. It refers to doctor of osteopathic medicine. It is considered an equivalent degree to the MD.

Osteopathic medicine focuses on treating the whole person, rather than a set of symptoms. It is a holistic practice, and doctors may recommend mindfulness and wellness habits in addition to prescription drugs and other treatment routines.

In real life, a doctor who has been trained in the United States as a physician and holds either of these degrees will be able to give you the same level of quality care. In writing, though, these terms do refer to different degrees.

DO vs. MD Check: Remember that the O in DO stands for osteopathy, which is a holistic framework for providing medical care. Since osteopathy and holistic are both spelled with an O, you should be able to use this trick to remember that a doctor with a DO degree is likely take a holistic view of treatment.

Is it DO or MD? MD and DO are both medical degrees. They refer to the titles doctor of medicine and doctor of osteopathic medicine, respectively. Physicians trained in the United States will be able to give you a high level of care with either degree.