The art world has a reputation, whether deservedly or not, for unwavering attention to detail and unforgiving strictness in terminology.

If you are writing reviews of visual art pieces, you will need to be well-versed in the language of the artistic community so that you will sound well-informed and trustworthy.

That said, if you don’t know the difference between a lithograph and a serigraph, you aren’t alone. Many people, especially those who are not artists, are unfamiliar with these terms.

As we will see, although they refer to similar styles of printing, each is created using a distinct process and must be used carefully.

What is the Difference Between Serigraph and Lithograph?

In this post, I will compare serigraph vs. lithograph. I will use each word in at least one example sentence, so you can see how it appears in context.

Plus, I will show you a helpful memory tool that makes choosing either serigraph or lithograph a little easier for your own writing.

When to Use Lithograph 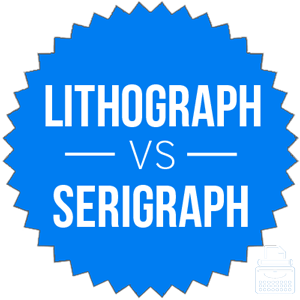 What does lithograph mean? Lithograph is a noun that means a printed image made with oil and water.

When making a lithograph, the printer creates an image on a flat surface using oil or grease. The surface is then covered in ink, which only sticks to the oil or grease and not the rest of the area. Paper is then pressed onto the surface, which absorbs the ink.

Lithograph comes from the Greek terms lithos, meaning stone, and graphos, meaning writing. The word was first used in English in 1825.

When to Use Serigraph

What does serigraph mean? Serigraph is another noun. It refers to an image printed on fabric using ink and stencils. Silkscreen is another word for this type of print. Artists make serigraphs by placing a stencil on silk or other fabric and then applying ink to the areas not covered by the stencil.

If the artist wishes to use multiple colors, he or she must use a different stencil for each one.

Serigraph is the product of the Latin word for silk spliced onto a Greek word, graphein, that means to write or draw.

Serigraph and lithograph are both types of art prints.

Lithograph vs. Serigraph Check: Since serigraph and stencil both begin with the letter S, you should have little trouble remembering which of these words is which.

Is it lithograph or serigraph? Lithograph and serigraph are nouns for two kinds of printed images. They may appear similar to an untrained observer, but the processes behind each type are different. Thus, the words are not interchangeable, and you would do well to use each carefully.