Home » Sensuous vs. Sensual – What is the Difference?

The words sensual and sensuous are problematic. They seem as if they should be synonyms, and in some ways, they are. The difference between them is slight, but as we shall see, very important.

One of these words is innocent, while the other could be interpreted as decidedly NSFW. You wouldn’t use it in an email to your boss, unless you and your boss are embroiled in an unethical workplace love affair (or want to start one).

Continue reading to learn the difference between these dangerous words.

What is the Difference Between Sensuous and Sensual?

In this post, I will compare sensuous vs. sensual. To give you an idea of how they look in sentences, I will provide several examples of each word in context.

I will also show you a helpful memory tool that makes choosing sensual or sensuous much easier.

When to Use Sensuous 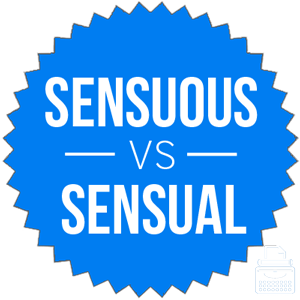 What does sensuous mean? The word sensuous is an adjective that means relating to the five senses. These senses, as we know, are sight, hearing, taste, smell, and touch.

One might speak of a sensuous aroma emanating from the kitchen while dinner is cooking, or a sensuous bouquet of flowers that brightens a dreary room.

When to Use Sensual

What does sensual mean? Sensual is another adjective related to the five senses. It specifically refers to gratification of the senses.

The word sensual has taken on risqué connotations. One could not write about a sensual massage without the reader wondering if it led to something more sexual.

As you can see, sensual would be considered “not safe for work.”

These two words are often misused for one another. In a more innocent world, they might be interchangeable, but the world we write in is not very innocent.

Sensual vs. Sensuous Mnemonic: Since sensual and sexual are inextricably linked in the minds of most audience members, and they both end in -ual, you can link them together in your mind, as well.

Is it sensuous or sensual? Sensuous and sensual are adjectives that relate to the activation of the five senses.