Home » Laid Out or Layed Out – Which is Correct?

If you work in the design world, whether in digital spaces, textiles, architecture, or any other subfield, you will probably get tired of using the word layout and its variants.

Layout has a related verb phrase, laid out, that many writers use to discuss the way they have designed something. Or is it layed out?

Depending on the company you keep, you may have encountered both forms. Only one is correct, though.

What is the Difference Between Laid Out and Layed Out?

In this article, I will compare laid out vs. layed out and let you know which version is correct. I will use that version in several example sentences, so you can see how it appears in context.

I will also show you a mnemonic device that makes choosing layed out or laid out much easier.

When to Use Laid Out

What does laid out mean? Laid out is a verb phrase that means arranged or sprawled.

A web page could be laid out for ease of use on mobile devices, or a designer might have laid out several magazines on her desk for inspiration.

Laid out consists of laid, a past tense verb, and the adverb out. Laid is actually the simple past and past participle form of the verb lay.

Here are some more conjugations of this verb:

When to Use Layed Out

What does layed out mean? Layed out is a misspelling of the phrase laid out.

Writers who aren’t familiar with the verb lay might understandably think that it forms layed in the simple past tense. Most verbs, after all, can be conjugated into the past tense by adding the suffix -ed.

Lay is an irregular verb, though, so it doesn’t follow the normal rules of English conjugation.

If you want to use it in the past tense, the correct spelling is laid.

If you look at the above chart, which graphs layed out vs. laid out, the spelling layed out is almost never used. 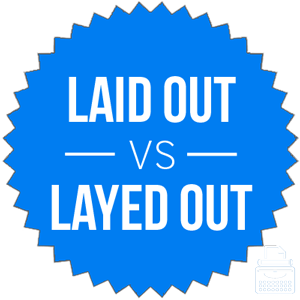 You should always use laid out instead of layed out. Layed is a misspelling based on the overextension of regular conjugation rules to an irregular verb. It is never correct.

Laid contains the letter I, so if you remember the phrase I should spell laid with an I, you will always remember how to spell this word.

Is it laid out or layed out? Laid out is a verb phrase that means sprawled or arranged, depending on context. Layed out is a misspelling due to an incorrect conjugation of the verb lay.