Home » To Long vs. Too Long – What’s the Difference?

The homophones too, to, and two are the basis of probably the most recognizable mistakes writers can make. All three of these words are pronounced identically, but each of them has a separate meaning.

For better or worse, these words are among a few other word sets that are viewed as socially distinctive markers of one’s writing. Other word sets are its/it’s, your/you’re, whose/who’s, etc.

What this means is you absolutely must learn the difference between these three words or risk being judged unfairly for your word choice.

Don’t worry, however! These words are easy to keep track of once you learn the difference between each one.

What is the Difference Between To Long and Too Long?

I’m going to compare too long vs. to long in this article. I’m also going to use each of these phrases in an example sentence because seeing them in context is important.

I’ll also show you a helpful memory tool that makes choosing too long or to long a bit easier.

When to Use Too Long

Too is an adverb that means more than is desirable. Long means either taking a large amount of time or a measurement of distance.

Long is interesting because it can denote even relatively small durations and distances. A fish might be only four inches long or a pop song might be two minutes long. Both of these measurements are relatively small, but long can be modified in several different ways to describe a variety of lengths.

When to Use To Long

What does to long mean? To long is an all-too-common mistake that people make when they really mean too long. Sometimes, it is a simple spelling oversight, but other writers mistakenly use one homophone in place of another.

To is a preposition, an infinitive marker, and sometimes an adverb, but it does not have the same meaning as too despite these words’ identical pronunciations.

You might still see the words to long next to each other in sentences, but not to describe something that is overly lengthy. Check out the sentence below.

Here, to is a preposition, and long is a grammatical adjective (although it’s also part of the proper noun Long Beach). The context makes it clear that the beach itself is not overly lengthy or that I didn’t stay there longer than I wanted.

Another context where you might find these next to each is with the phrase to long for something. In this construction, long is a verb meaning to have a strong wish or desire. 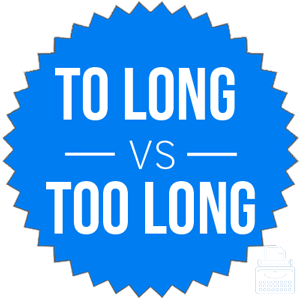 You should only use too long if you are describing something that has a great duration or size. To long might have other uses, but it is not a substitute for too long.

Since too is a longer word than to, you can remember to use too long for something that has a great length or duration.

For a larger discussion of too and to, see here.

Is it to long or too long? Too long means more than the desired length or duration. To long is a typo or a misunderstanding of the grammatical functions of to and too.