There are many words that sound the same or nearly the same, but have different meanings. In English, these words are called homophones.

Counsel, council, and consul are three often misused near homophones. To make matters worse, their contexts are often related.

For instance, the following example is grammatically correct, albeit somewhat confusing sentence.

The three words are all used correctly. Of course, even if this visit is exactly the event you are trying to describe, you would want to rewrite that sentence. It is confusing to the point of distraction.

If you aren’t sure whether you mean to use council or counsel, or even consul, continue reading for an exploration of these words.

What is the Difference Between Council and Counsel?

In this article, I will compare council vs. counsel. I will use each word in a sentence, illustrating its proper meaning and context.

I will also explain a useful trick to help you decide whether council or counsel is correct, based on the context of your sentence.

When to Use Council

What does council mean? Council is a noun. A council is a group of people appointed to make decisions or give advice.

Council is never a verb. Thus, a council might give counsel, but a council would never give council. See the examples below.

When to Use Counsel

What does counsel mean? Counsel can be a noun or a verb.

As a verb, counsel means to give advice or guidance.

As a noun, counsel is a synonym of advice and guidance, especially that given formally from a lawyer, psychologist, etc. Thus, when you counsel someone, you are giving them counsel. The sentences below are examples of both uses.

When to Use Consul

What does consul mean? A third noun, consul, is a near homophone of council and counsel. A consul is a diplomatic representative living in a foreign city. Consul is sometimes a synonym for ambassador. 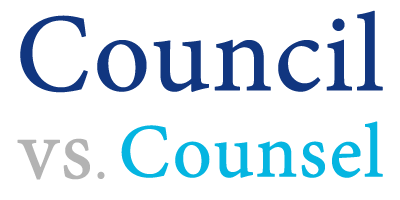 Here is a helpful trick to remember counsel vs. council

If the word you are using is a verb, use counsel. Council and consul are never verbs.

The picture is less clear if the word is a noun. If the noun refers to a single person, living in another place, choose consul. For a group of people, living anywhere, choose council instead. If you’re not referring to any people at all, use counsel as a synonym for advice or guidance.

Consul refers to a single person. Since consul and singular each contain a U, this usage should be easy to remember.

Is it council or counsel? Council, consul and counsel are all nouns, but only counsel can also be used as a verb.

As a verb, counsel also means to give advice.

Since consul and singular are both spelled with a U, you can remember that a consul is a single person, whereas a council is a group of people.

If you are still confused, don’t hesitate to check this article as often as you need for a quick refresher.