Home » Below or Bellow – What’s the Difference?

In English, even minor spelling differences can completely change the meaning of common words. In these cases, a simple typo can completely derail your sentence and turn your writing from polished prose to meaningless drivel. Luckily, you can catch most of these errors through diligent proofreading.

Below and bellow are two such words. There is only one letter’s difference between them, but they are actually different parts of speech. One is a preposition, and the other is a verb.

You might be able to use prepositions as verbs in poetry, but for formal writing, you will need to know the difference between below and bellow.

What is the Difference Between Below and Bellow?

In this post, I will compare below vs. bellow. I will show you example sentences for both words so that you can see how they appear in context.

Plus, I will include a mnemonic device that you can use to decide whether bellow or below is the better word for your writing.

When to Use Below

What does below mean? Below can be a preposition or an adverb. In both cases, it describes the position of something relative to something else, namely, something that is underneath another object.

In the example from The Wall Street Journal, the prepositional phrase is below historical averages.

When to Use Bellow

What does bellow mean? Bellow is a verb. To bellow is to yell loudly in a deep voice.

An angry merchant might bellow to a thief to get out of his shop, or a gladiator might bellow a threat to his opponent.

As a verb, bellow is conjugated as follows,

The word bellows is also a unique noun. Bellows are a device for blowing air to stoke a fire. Bellows is only ever plural; there is no singular bellow. 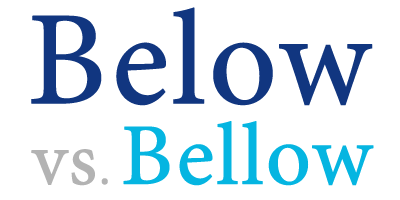 It is easy to choose between these two words, so let’s go over a trick to remember bellow vs. below.

Bellow and its rough synonym holler each have a double L, and they are both verbs. You can use the spelling of these words as a reminder that bellow is a verb.

Is it below or bellow? Despite their similar spellings and close pronunciations, these words function as different parts of speech and are never interchangeable.

Don’t forget—you can always reread this article if you need a quick refresher on the differences between these words.