If you have leafed through the pages of a cookbook recently, you may have noticed that some soup recipes call for broth, while others call for stock.

Are these words two different names for the same ingredient, or are they separate items that could make or break your delicious dinner? Let’s find out.

What is the Difference Between Broth and Stock?

In this post, I will compare broth vs. stock. I will outline the difference in each word as it relates to cooking and meal preparation.

Plus, I will show you a helpful memory tool that will make choosing either broth or stock easier for you own writing, as well as your next meal.

When to Use Broth 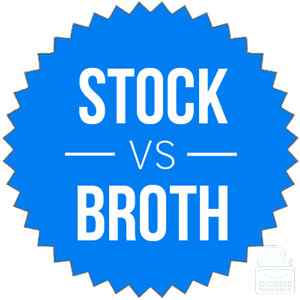 What does broth mean? Broth is a noun. It means a savory liquid that has had meat cooked in it.

Chicken broth, for instance, is made by simmering chicken meat, vegetables, and seasonings in water for several hours until the flavors are absorbed. The broth can then be used to makes soups, stews, and other dishes.

Here are a few examples of broth in a sentence,

There are many types of broth. Most supermarkets sell premade chicken and beef broth. Vegetable broth is made via the same process, but without meat, and is also widely available.

When to Use Stock

What does stock mean? Stock is also a noun. It is very similar to broth, with a few key differences. Stock is typically left unseasoned. It is also cooked for a longer period of time (up to six hours). Most importantly, stock contains animal bones. When animal bones are cooked slowly, they release marrow and other substances into the water, which often makes stock richer and darker than broth.

Unless you are writing a cookbook, most readers probably won’t care whether you use stock or broth, since they refer to such similar substances. But, when precision matters, you will want to know the differences between these words.

Stock vs. Broth Check: Stock contains bones. Since stock begins with the same letter that bones ends with, it should be easy to remember the difference between stock and broth.

Is it stock or broth? Stock and broth are both nouns that refer to a savory liquid used in soups, stews, and many other dishes.