Something that happens frequently could also be said to happen often. Could we also say that it happens oftentimes?

Both often and oftentimes are adverbs. Oftentimes usually only comes before the verb it modifies, while often can come either before or after its verb.

So often is more versatile, shorter, and clearer, and it also sounds less old-timey and dated. Is there any reason at all to use oftentimes, or even often times?

What is the Difference Between Often times and Oftentimes?

In this post, I will compare often times vs. oftentimes. I will use each of these variants in several example sentences, to let you see how they should appear in context.

Plus, I will show you a helpful memory tool that makes choosing often times or oftentimes even easier.

When to Use Oftentimes

What does oftentimes mean? Oftentimes is an adverb that means frequently or commonly occurring.

It is considered somewhat quaint, though this quaintness can be a useful tool to add an antique weight to your writing.

Here are a few examples:

Often also has the variants oft and ofttimes. Oft often appears in hyphenated phrasal adjectives, like oft-repeated or oft-quoted, but should be avoided in other situations.

There is no good reason to use ofttimes unless you are living in Victorian England.

When to Use Often Times

What does often times mean? Often has a surprising number of variants, but often times is not one of them. While these words do occasionally appear as the compound oftentimes discussed above, they do not have the same meaning when separated.

The words often and times might still appear adjacent to one another in other contexts, though. Consider the following sentence.

Even though often and times are next to each other in the sentence, they don’t mean the same thing as oftentimes.

Also, notice that often means the same thing as oftentimes in this sentence. 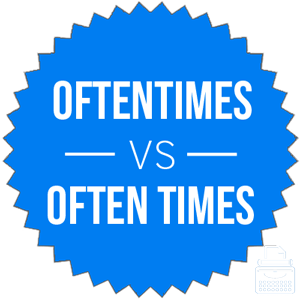 I, personally, prefer using oftentimes over often when beginning a sentence, which is why you might see its used scattered throughout this site.

I think starting a sentence simply with often feels empty, but oftentimes provides an extra syllable to round out the beginning of the sentence. Others disagree, however. Since both words have the same meaning, a good piece of advice is to let your ear be your guide. If one words sounds better in a sentence than the other, use that word.

In the middle of a sentence, however, often is almost always the better choice. It means the same thing, and it is clearer and shorter. Again, let your ear be the judge.

Often times, on the other hand, is not an adverb phrase and does not mean the same thing as often and oftentimes.

Oftentimes vs. Often times Check: Oftentimes and often are both single words, and since they have identical meanings, you can remember never to split oftentimes apart when you do decide to use it.

Is it oftentimes or often times? Oftentimes is an adverb that can also be shortened to often as a synonym for frequently. Often times is not an equivalent adverb phrase.