When two words are homophones, they have similar pronunciations but different meanings.

Plane and plain are two English homophones, which would be confusing enough, but each of them also has a meaning that refers to a flat area. What’s a poor writer to do?

As tricky as these words can be, there is an easy way to remember the difference between them.

What is the Difference Between Plain and Plane?

In this post, I will compare plane vs. plain. I will use each of these words in at least one example sentence, so you can see them in context.

Plus, I will use a helpful memory tool that you can also employ to make choosing plane or plain a little easier.

When to Use Plain

What does plain mean? Plain can be an adjective or a noun.

As an adjective, plain means featureless or unremarkable. Plain ice cream has no toppings or extra ingredients, such as fudge or strawberries. Plain pizza is just cheese with no pepperonis, sausage, green peppers, or anything else.

Something that is just plain stupid is stupid with no mitigating factors or other explanations.

As a noun, a plain is a geographical feature characterized by a flat landscape and short vegetation, if any.

The central United States is renowned for its rolling, grassy plains. A floodplain is a flat, low-lying area near a river that often floods during wet seasons.

The sentences below are additional examples.

When to Use Plane

What does plane mean? Plane is a noun. It has two main senses: it can mean a flying vehicle with wings, or a geometrically defined flat area on which a straight line would lie. Below, you will find examples of plane used to refer to a thing that flies:

Here are some sentences that illustrate the usage of plane as a concept in geometry: 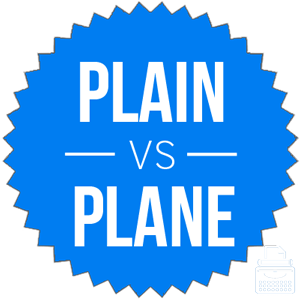 Plain and plane can be confusing, especially since each word can sometimes describe a flat area.

Since plane and geometry each contain the letter E, keeping them straight should not be that difficult.

Is it plain or plane? Plane and plain are homophones.