Today, handheld cutting tools are ubiquitous in human society. In the developed world, a child’s ability to adroitly wield a pair of scissors is viewed as an important developmental milestone.

Have you ever wondered where the word scissors originated, or why you almost never hear of a single scissor? Why does everyone seem to want more than one of these tools when asking for them or writing about them?

If you have ever been confused about this unusual linguistic construction, continue reading to learn more.

What is the Difference Between Scissor and Scissors?

In this post, I will compare scissor vs. scissors. I will use each of these words in at least one example sentence. This way, you can see them in context.

Plus, I will share a mnemonic device that makes choosing either scissor or scissors a simple matter.

When to Use Scissors 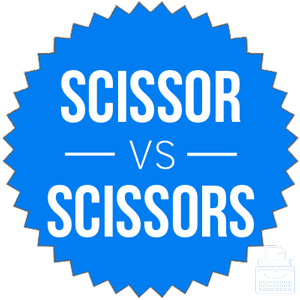 What does scissors mean? Scissors is a plural noun. Scissors are two handheld blades fastened together that are used for cutting things. Scissors are usually referred to in the plural or as a pair of scissors.

Humans have been using scissors for at least 3,000 years. They are a very useful tool for cutting a variety of materials, including paper, rope, wire, and cloth.

The word itself can be traced to equivalent terms in English and Middle French. Interestingly, the original Latin form of this word was singular and was derived from a verb that meant to cut.

When to Use Scissor

What does scissor mean? Scissor is the singular version of the same noun. It is almost never used, much the same way that bellows are nearly always referred to in the plural. As noted above, the default singular form would be a pair of scissors.

Some English speakers might use scissor as a verb that means to cut something with scissors or to cut between something. This usage is viewed as nonstandard in the linguistic community, though it may eventually gain acceptance.

In this sense, it means the same thing as “cut,” which is a much better choice for such a sentence.

Is it scissors or scissor? Scissors are handheld shearing tools that are useful for cutting many things. They are almost always plural or referred to as a pair of scissors. Thus, the singular scissor is almost never used.