Most businesses are run in such a way as to increase revenue so that stakeholders can benefit from the profits. Some, however, use this excess money for other purposes, like charity or to grow the operations itself.

There are two terms for such a business, which, in this sense, is usually called an organization. Those two terms are nonprofit and not-for-profit.

Which is more appropriate? If you aren’t sure whether to use not-for-profit or nonprofit, this post will help you decide.

What is the Difference Between Not-for-profit and Nonprofit?

In this article, I will compare not-for-profit vs. nonprofit. I will use each in a sentence and explain how they have slightly different connotations.

Then, I will show you a useful trick to help you decide whether you should use nonprofit or not-for-profit in your own writing.

When to Use Nonprofit

What does nonprofit mean? Nonprofit can be used as a noun or an adjective.

As a noun, it refers to an organization that does not operate solely for gain.

As an adjective, it describes such an organization.

Nonprofit is sometimes hyphenated to form non-profit. Do not spell the word this way. It is incorrect.

When to Use Not-for-profit

Not-for-profit carries the same meaning as nonprofit in both of these contexts (noun and adjective), but it provides a clearer picture of the corporation itself (more on this below).

Nonprofit is the older term, but it is somewhat misleading. It implies that these companies or organizations do not operate at a profit. Most “nonprofits” actually make money, but it is either reinvested to further operations or used for charity work. Thus, not-for-profit paints a more accurate picture of the ways surplus revenue is used in these business models.

Bryan Garner states in Garner’s Modern English Usage, “Not-for-profit is thought to reveal more accurately that the purpose is not for private gain, though indeed the organization may profit.”

Which Term is More Common?

As you can see in the chart below, both nonprofit and not-for-profit have seen increased use in recent years. Nonprofit is still more common, but not-for-profit is gaining ground.

This graph is not scientifically accurate, since it only looks at usage in books written in English since 1800. It draws no data from newspapers or tax documents. It is still useful for identifying a long-term usage trend. 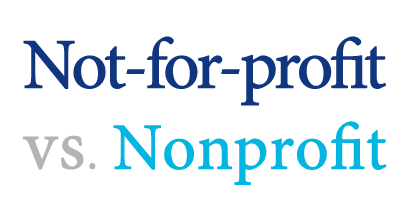 Here is a helpful trick to remember not-for-profit vs. nonprofit.

Not-for-profit and nonprofit are interchangeable in current usage. Which word you choose depends on your goal as a writer.

If you are writing in an academic or professional setting and value accuracy over familiarity, choose not-for-profit. It is less common, but it more clearly illustrates the way these businesses operate.

If you are writing for an audience that would not be interested in the nuances of not-for-profit finance, you could use nonprofit. Most readers are more familiar with this term, so it will be less distracting. Do not use a hyphen, though.

You can remember to choose not-for-profit for formal writing since it contains the word for, which forms the first syllable of the word formal.

Is it nonprofit or not-for-profit? Nonprofit and not-for-profit are interchangeable terms for a business or organization that uses excess revenue for other purposes than the benefit of stakeholders. Not-for-profit contains hyphens, but nonprofit should never contain hyphens.

Even though not-for-profit is more accurate, it is less common than nonprofit. You can remember to choose not-for-profit in professional writing since it contains for, which is also used to spell formal.

Or, you can always check this article for a quick refresher.