Home » Shoo in or Shoe in – Which is Correct?

Homophones are words that mean different things but are pronounced identically.

Shoo and shoe are homophones that are easily confused in the phrases shoo in and shoe in. Continue reading to learn more about these confusing words.

What is the Difference Between Shoo-in and Shoe-in?

In this post, I will compare shoo-in vs. shoe-in and outline the correct spelling you should use in your writing. I will several example sentences so you can see how the word should appear in context.

Plus, I will share a mnemonic device that will make choosing shoe-in or shoo-in much easier.

When to Use Shoo-in 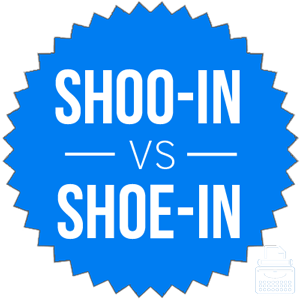 What does shoo in mean? Shoo in can be a noun or an adjective. You will usually find it hyphenated to shoo-in in either usage.

As a noun, a shoo-in means a candidate who is very likely to win a contest or other competition.

As an adjective, it describes such a candidate.

Here are two example sentences where shoo-in is used as a noun,

Here are some example sentences where it is used as an adjective,

When to Use Shoe In

What does shoe in mean? Shoe in is a misspelling of the phrase shoo in, based on the homophones shoe and shoo.

Most sources consider it a mistake, but it has become more common over the last few decades.

The chart below shows the relative usage of shoe in vs. shoo in in their more common hyphenated forms,

As you can see, shoo-in, is the standard spelling, and it still predominates in common usage by a large margin. Bryan Garner, in his book Garner’s Modern English Usage, estimates the disparity to be 3:1 between shoo-in and shoe-in. In other words, stick to shoo-in.

Interestingly, shoo in is also a verb phrase. A person might shoo in the chickens when closing up the barn for the night, for example. Likewise, shoe in might commonly appear when someone inserts a shoe into something, like a mud puddle.

Thus, the graph below, which shows each phrase unhyphenated, is interesting. Here the trend is reversed: more writers use the partial phrase shoe in than the verb phrase shoo in:

If you are referring to a candidate who is very likely to be the winner, use the hyphenated shoo-in. Shoe-in, while gaining in popularity, is still a mistaken spelling. Unhyphenated, each phrase takes on a different meaning.

Since shoo is a verb that means to usher something in, think of a shoo-in as someone who is likely to be ushered into victory. This memory tool should help you keep these versions of the phrase straight in your mind.

Is it shoo-in or shoe-in? Shoo in and shoe in are variations of a phrase that means a candidate who is likely to win as a noun and describes such a candidate as an adjective.